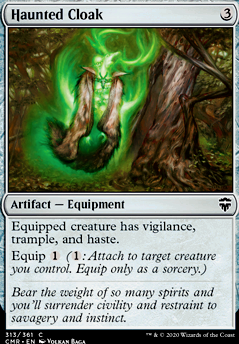 Haunted Cloak occurrence in decks from the last year

Most Metal Graveyard
by drkoolerbz 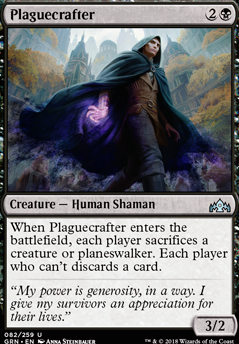 One Piece At a Time
by jakeelephant006

T H E Y came from above v.6
by JackNavi

Sigarda is my favourite Voltron!

I find that by chosing to go all in with auras, you may be overlooking interesting equipments, like Hammer of Nazahn for the sweet indestructible or Haunted Cloak that gives your commander everything else she needs and doesn't have.

If you stick with enchantments only, you could add Abundance, which combos nicely with Sylvan Library, allowing you to keep all 3 cards you draw each turn.

A great asymmetric board wipe for this deck is Single Combat.

This may be meta-specific, but since it was printed I won at least two games thanks to the presence of Questing Beast, nullifying Glacial Chasm and other damage prevention.

Hey there! This deck looks sweet! In the way of recommendations, Crystalline Giant seems like it would be awesome in this deck. Chariot of Victory and Haunted Cloak both give you lots of keywords, notably a few that don't show up in white that much, and Concerted Effort would help you keep some keywords on all your creatures during your opponents turns. This deck looks very fun and awesome! Notably, Worldslayer always makes me happy (and it actually has synergy in this deck!). Very neat!

I'll cut Dinrova Horror, Scuttlemutt, Haunted Cloak or Vorrac Battlehorns.. But you're better to know what to cut, while playing the deck, you'll see which cards you prefer and which one you never play