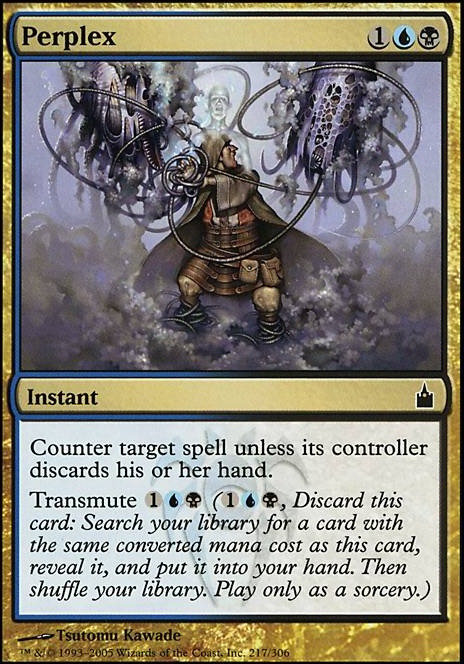 Counter target spell unless its controller discards his or her hand.

Perplex occurrence in decks from the last year

Unfortunately I only own one copy of Mana Drain, and I have it in my Jhoira deck. If I had another though, I'd certainly throw it in here.

Perplex is an interesting option. Any idea what I could cut for it?

Counterspell is good, but you probably could put a Mana Drain in that spot. Instead of Void Shatter, play Perplex. This card literally says "foolish mortal, I'm going to hurt your brain." It's also a great way to tutor up a lot of tasty 3-drop spells in this list, like Deliver Unto Evil, or Counterflux (if you know someone has a Flusterstorm in their deck.)

Ooh, I love that Perplex has the same transmute cost as all my combo pieces, I'm definitely going to put that, and the Mizzium, in. Anything to speed up this deck, one thing I did notice during playtest was the fact that the deck is slow.

I'm kinda hesitant and reluctant to downgrade Terminate, but you make a very good point about eliminating a color from the deck. I gotta think that one over.

Cool deck. You could use something like Mizzium Transreliquat to get out a second copy of Myr Galvanizer. Or you could replace the Negates with Perplex so that you could transmute up any of the combo pieces. If you did that, you could still keep the price about the same by replacing Terminate with something cheaper like Doom Blade. You could also simplify your mana base in that case by just going dimir.