Converge â Search your library for a creature, instant, or sorcery card with converted mana cost less than or equal to the number of colors of mana spent to cast Bring to Light, exile that card, then shuffle your library. You may cast that card without paying its mana cost.

Bring to Light occurrence in decks from the last year

King in the Castle
by rweber2015 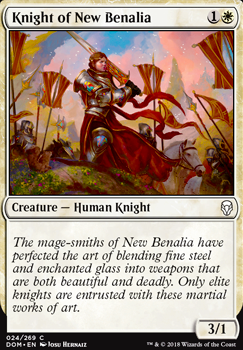 Vial Taunter - You hit like a Kobold! Goblinpower!
by LosWokos

So, what I'm thinking so far:

Bring to Light does actually get a kicked Rite of Replication. Bring to Light says "you may [b]cast[/b] that card without paying its mana cost." When you cast it for 0 mana, you can still pay the kicker.

Eerie Ultimatum is definitely worth the cost in a deck like this. If you want to save a bit of money, you could also replace Brago, King Eternal for Eerie Interlude.

I think Eerie Interlude would help a lot since it 1) offers protection from boardwipes, 2) can be used on your opponents' turns after combat, 3) combos GREAT with Archaeomancer, and 4) has to be countered or discarded when you don't have the mana.

What do you guys think about Mythos of Brokkos?

The two of then works really well alone and have utility for the deck.

Another addition to the list is the Eerie Ultimatum replacing March from the Tomb, the problem is that it costs 2 dollars.

I need you to get to a conclusion.

TriusMalarky on Why Does WotC Continue to ...

Harmonize and Beast Within have been printed into non-Standard sets rather often because they are good in EDH, although they do see some occasional Modern play.

Color pie breaks are weird, and they mostly exist because WotC wants to push boundaries. Pushing boundaries is fine, but in some cases they go overboard.

See, Beast Within is not an insanely powerful card in most formats. It would never be Standard playable, other than as a Sideboard card to allow Green to deal with Planeswalkers. Except in Standard, you just add blue and steal whatever's bothering you or add black and use Assassin's Trophy.

Where Best Within shines is formats where there are huge permanents that can singlehandedly win the game. I, for one, always prefer my opponent having a 3/3 than a Karn or Ugin or Eldrazi Titan. That's why it's good in EDH -- everybody is running giant game ending permanents. Beast makes sure Green is able to help out in the 'kill the guy with the OP board state' game. Without it, green wouldn't be much worse, but with it, it gives Green the ability to be more than "mana and John Cenasaurus", if only with one card. Beast doesn't break EDH, it helps it stay less broken, and it's not even all that amazing. is still a decent amount in EDH. It's like 1 mana in Modern, or 5 in Standard.

The opposite end of the spectrum is Veil of Summer. On the surface it's a "hey, maybe we can give green some control hate". In practice, it's Dismiss for that is restricted to Blue/Black instants and sorceries. 3 mana discount but the downside is it only hits half the color pie? It was maindeckable in 2 formats.

Another note is this: it's not hard to add another color if you have the $$ for the manabase. If you need a counterspell, you can splash blue for Spell Pierce any day. If you're a mono color deck, it's easy. A two color deck? Great, now you're 3 colors and out $50 for lands. Already 3 colors? Oh, well maybe it's a little more difficult.... At 4 colors you either don't try or you're already that color, and at 5 you're playing Humans or Slivers or Bring to Light. Color pie breaks don't really mean that the game is broken -- in fact, color pie breaks are often better for the budget player because they don't have to invest as much into lands.

theXact Yes, being able to tap my fetches for mana is the main purpose but it also allows Bring to Light to find 4 cmc targets. Recently I have been thinking about replacing Urborg with a basic mountain for several reasons. I cut down the mountain count for Fabled Passage, Prismatic Vista, and Field of the Dead. A couple people in my playgroup run Golos, Tireless Pilgrim decks and when an Urborg hits the board they will search out Cabal Coffers. Dryad of the Ilysian Grove provides the same utility and then some so I don't think Urborg will be missed.

Glad you love the deck! I hope your creation serves you well!

In Modern, Niv-to-Light has a similar shell. Bring to Light essentially lets you run 8 copies of Niv-Mizzet Reborn since it can tutor it and then cast it without paying the mana cost. Most of the cards used in that deck are legal in Pioneer, see: https://www.mtggoldfish.com/articles/much-abrew-niv-to-light-modern-magic-online

I'd cut Arboreal Grazer for almost any mana dork, be it Gilded Goose or Elvish Mystic the Grazer is a woeful top deck and while an okay blocker, it won't win you the game. Even running 4x Attune with Aether is a better choice as you have other ways to leverage the energy. Somewhere in your 75 I'd say you want Kambal, Consul of Allocation against spell heavy decks like Prowess or Izzet Phoenix. Domri, Anarch of Bolas can make your creatures uncounterable, much like Teferi, Time Raveler but Domri is far easier for your deck to cast, since it is base green.

Hope this helps, good luck with your brew.

I did think of some of those cards, specially Sneak Attack and Selvala's Stampede being the cheaper ones (this deck does not have a ton of ramp). However, I opted for the dirtbag route, focusing a lot the ways of cheating big creatures and play more tutors. Actually, this deck has a lot of something I love, which is tutoring for the right tutor. Example: you Merchant Scroll into Bring to Light into Hypergenesis . Or you Merchant Scroll into Muddle the Mixture and transmute into Oath of Druids ! :D

That being said, I might still add Stampede, it's a really good card! I don't like that Sneak Attack exiles the creature in multiplayer. And Aminatou's Augury and Tooth and Nail are expesive manawise, but really good. I don't know!

I'm glad you liked the list and thanks a lot for commenting! :D