When Fleetfoot Panther enters the battlefield, return a green or white creature you control to its owner's hand.

Bant Birds and Beasts
by bonzodoot

Rin and Seri, Inseparable
by TKEddie5 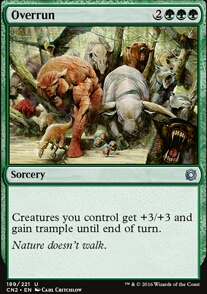 I played Aluren with Fleetfoot Panther and Whitemane Lion to create however many Dog creature tokens and infinite ETB and Cat spell cast triggers (I had Purphoros, God of the Forge, Impact Tremors, and Aetherflux Reservoir in my version). Unless your playgroup frowns upon infinite combos, that might be a fun route to try to assemble!

Destiny Spinner is great in an enchantment and creature focused deck. Academy Rector would also be a strong addition- if you want sac outlets for it then Natural Order and Eldritch Evolution are great. Aluren is also incredibly powerful with Whitemane Lion/Fleetfoot Panther to get infinite creature casts for karametra triggers. If you go that route then there are plenty of ways to abuse the cast triggers like Oketra's Monument, Aetherflux Reservoir, etc.

After some thought I'm going to throw in some of Tata's recommendations immediately. Nissa, Voice of Zendikar and Knight of the Reliquary are out. Fleetfoot Panther and Woodland Bellower are in.