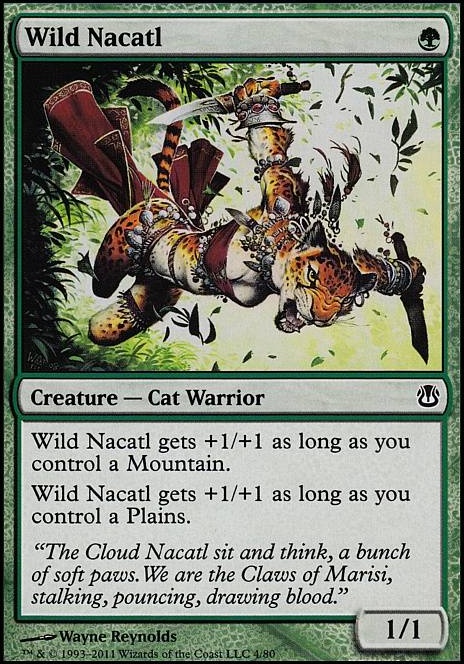 Wild Nacatl gets +1/+1 as long as you control a Mountain.

Wild Nacatl gets +1/+1 as long as you control a Plains.

@wallisface thats how feel too I think...just hoping/wondering if there was a "easy" or simple adjustment that could be done... I saw a flashy new toy/option and was really really tempted imagining paying for 6 damage Lightning Bolt and for a Wild Nacatl on steroids... it just seemed really cool like i was gonna break zoo or something lol.

GabrielHK97 - Ohhh! The lies and Deceit! Calling it a token deck when it is not! Heresy!!!

Whenever you get around to dropping your version of cat tokens, let me know! Always fun to talk shop and see how others approach the same problem.

Given that disclaimer that this is more a cat tribal aggro, it makes a lot more sense now to keep Wild Nacatl over Sacred Cat. You are right that getting her pumped to a 3/3 on turn 2 and potentially a 5/4 on turn 3 is potent.

Taxing Cats huh? Interesting...I personally have never run Ghostly Prison or any of the similar cards as I tend to enjoy aggro more than mid or late decks but I can say if you do not have enchantment/artifact removal, it is super annoying as you just can not do much then unless you have a BIG creature with trample.

Let me know what you think of Fateful Absence in exchange for Path to Exile...I am also experimenting with the removal spells and find each somewhat situational considering their pros/cons but just can not make up my mind as to which is generally the less situational.

Regarding the lands, you are not wrong that the 2.31 average CMC is a little high for aggro so some extra lands are warranted. I got tired of using other peoples tools for calculating how many lands to include and just did the math to calculate the probabilities of getting X lands in an opening hand of 7 with Y cards in a deck when you have Z lands in the deck. Also considered the probability of drawing 0-3 lands in the first three draws. The logic being I wanted the optimize the probability of getting ~3 lands in an opening hand and also optimize the probability of not just drawing lands once the game started...In general, it has worked but it is still just probabilities so there are still games where I can mulligan 3 times and still not see a land and others where I draw seven cards and only draw lands or vice versa. Got to love it, lol!

Ya, trust me...you only need like 1-2 copies of Esika's Chariot but it is pretty awesome. I run a single copy in my cat token deck and it is great to drop it with at Anointed Procession in play for 4 2/2 cats. That is a bit nicer than Anointed Procession + Leonin Warleader as Leonin Warleader has to attack to get those tokens out. the chariot just needs to come into play. Very nice.

lhetrick13 - thanks for the feedback!

First of all, I have to apologize to you, the name of the deck is kinda misleading, it is not focused on tokens or lifelink, it just happens to be there, so I removed hubs to not create confusion.

I have other cat decks, one focused on lifelink and another focused on creating tokens, stay tuned for when I drop them here!

I really thought about swapping Wild Nacatl for another cat, but since it it a very agressive deck, It can potentially hit an enemy with 3 on turn 2 (if you drop Wild Nacatl on turn 1 and then drop Jetmir's Garden on turn 2) and with 5 on turn 3 (if you drop King of the Pride), that is very powerful. I run Sacred Cat on my token focused cat deck, very good card.

Anointed Procession and Parallel Lives are indeed very good cards, but again, I'm not that focused on making tokens (sorry again). I thought about Ghostly Prison because I was inspired about a cat and taxes deck I saw on youtube, and felt that taxing my opponent in order to attack me is kinda good. Anointed Procession is also on my token focused cat deck.

About Path to Exile that is very true! I'll swap with Fateful Absence, thanks for the suggestion!

I run 24 lands because the mana average is kinda high but I think I could pottentially drop 1 land...

Indeed Esika's Chariot is a welcome addition to the deck, I just haven't figured out what I could swap for it, maybe a Qasali Pridemage... 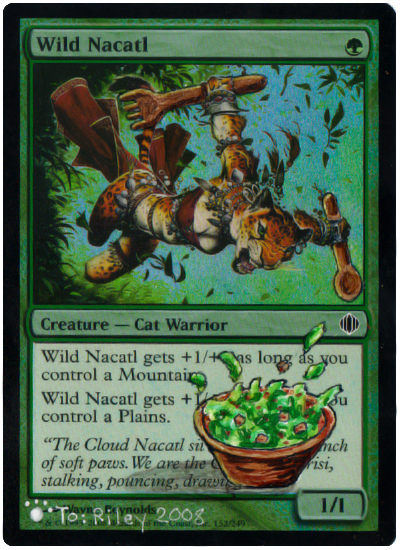 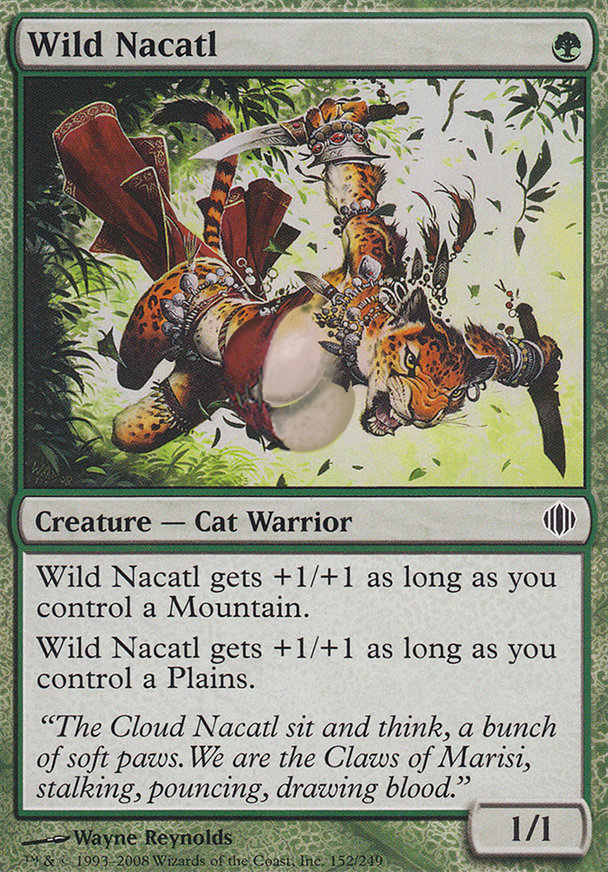 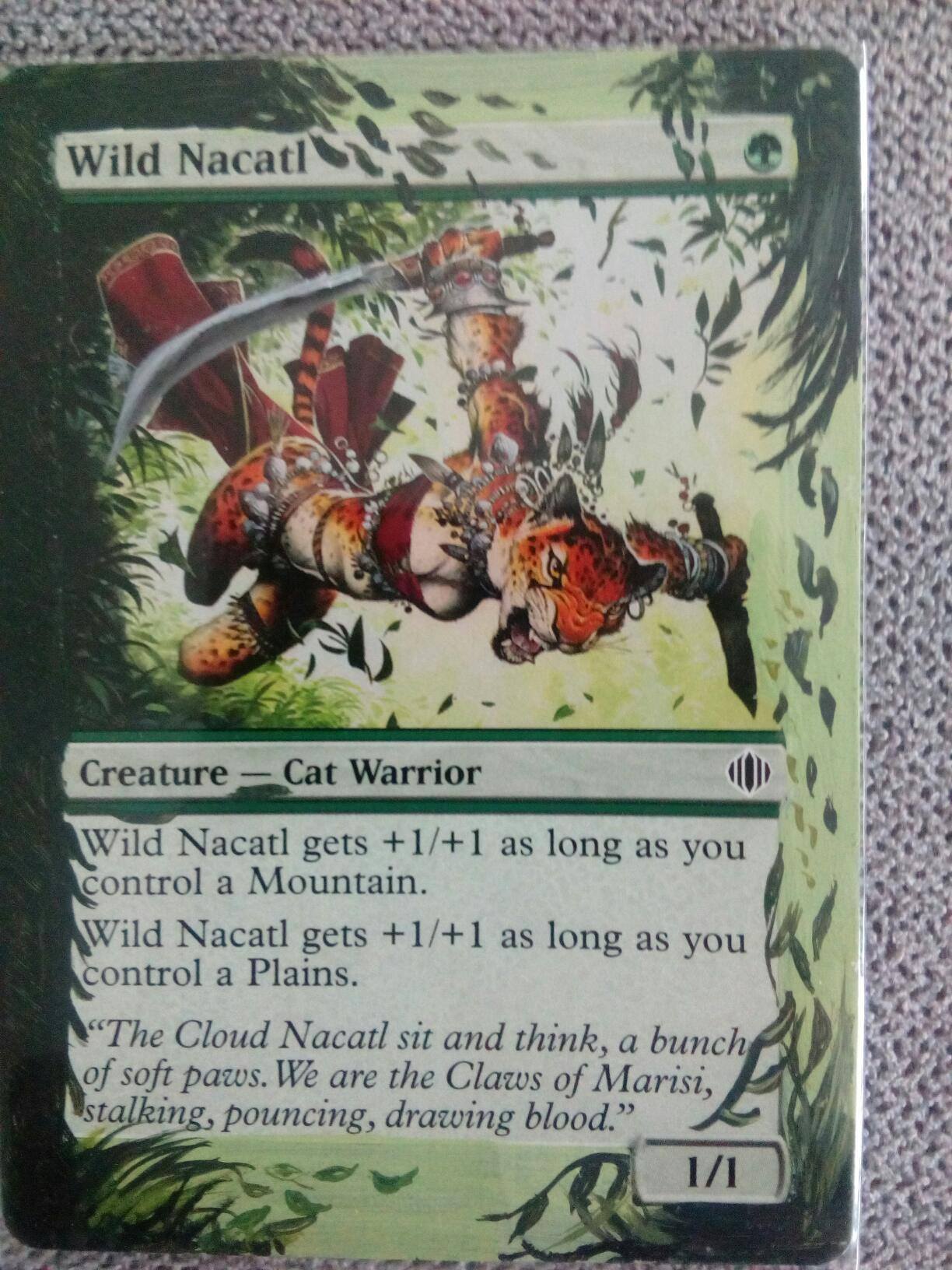