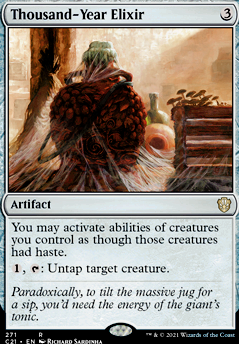 You may play the activated abilities of creatures you control as though those creatures had haste.

Have you considered Emiel the Blessed + Village Bell-Ringer? with Thousand-Year Elixir, you can also just use Emiel and any dork that can produce 4+ mana. Emiel + Eternal Witness is nice tech too - you can even use it grab basically any instant/sorcery and channel it through Blind Obedience to drain the table given infinite mana.

They're good suggestions. I just prefer the Gaea's Herald spells can't be countered cuz it can protect walking ballista and heliod and stoneforge Mystic. And for one mana more it's never really a problem.

I'm too afraid to give everyone else at the table haste so I prefer to use Thousand-Year Elixir.

And The druid is good but I feel that I get more Mana through the creatures themselves. I'm sure there's a couple that it can definitely help with but not enough that I think it's needed for the deck.

Gidgetimer thanks, what a duh moment, of course the Goblin Welder is tapped then

so you would need an artifact that produces at least 3 mana, one that i have f.e. Gilded Lotus and Lithoform Engine for this to work

but that is a very convoluted 4 card combo that doesn't do anything without a 5th card, something that produces 4+ mana would give infinite mana, its a shame having two routes with two different creatures would have been great

Gidgetimer on Are these Goblin Welder oder â¦

The place your combo breaks down is after you tap welder to return the Sol Ring and sacrifice the Thousand-Year Elixir. You now have a tapped Goblin Welder and Sol Ring which is a different board state than the original untapped welder and Sol Ring.

i've been looking around for this topic and didn't find any combo resembling this so i wanted to ask if i am just mistaken in my train of thought, because normally the community has thought of every crazy combination that is possible

If i have something out like Reckless Fireweaver or Fuming Effigy this is basically an instakill all opponents and i wouldn't even need Sol Ring, but any artifact producing 1 mana would be enough

A Little more complicated would be Goblin Welder out with Dross Scorpion and Liquimetal Torque and one artifact creature in the yard, one on the field

infinite ETB, infinite leave graveyard triggers, theres several ones that would be an instakill, draw infinite...

so let me know if i missed something and this complete bullshit, or if this would actually work