Wheel With It Niv-Mizzet Parun EDH
by The_Munchkin

Hello Everyone! Welcome to a heavily upgraded version of my original Commander deck. I started out with this as a casual deck and it slowly morphed into a commander in 2015 after I was introduced to the format by my good friend Suns_Champion. Since then I have never looked back and all I ever play is EDH. Since my meta includes both my playgroup at home in Kansas City and at school in Manhattan "the little apple" KS it is very diverse, although my home playgroup which includes Suns_Champion, karnwithpants, and Bezter, among others, is the higher power group. 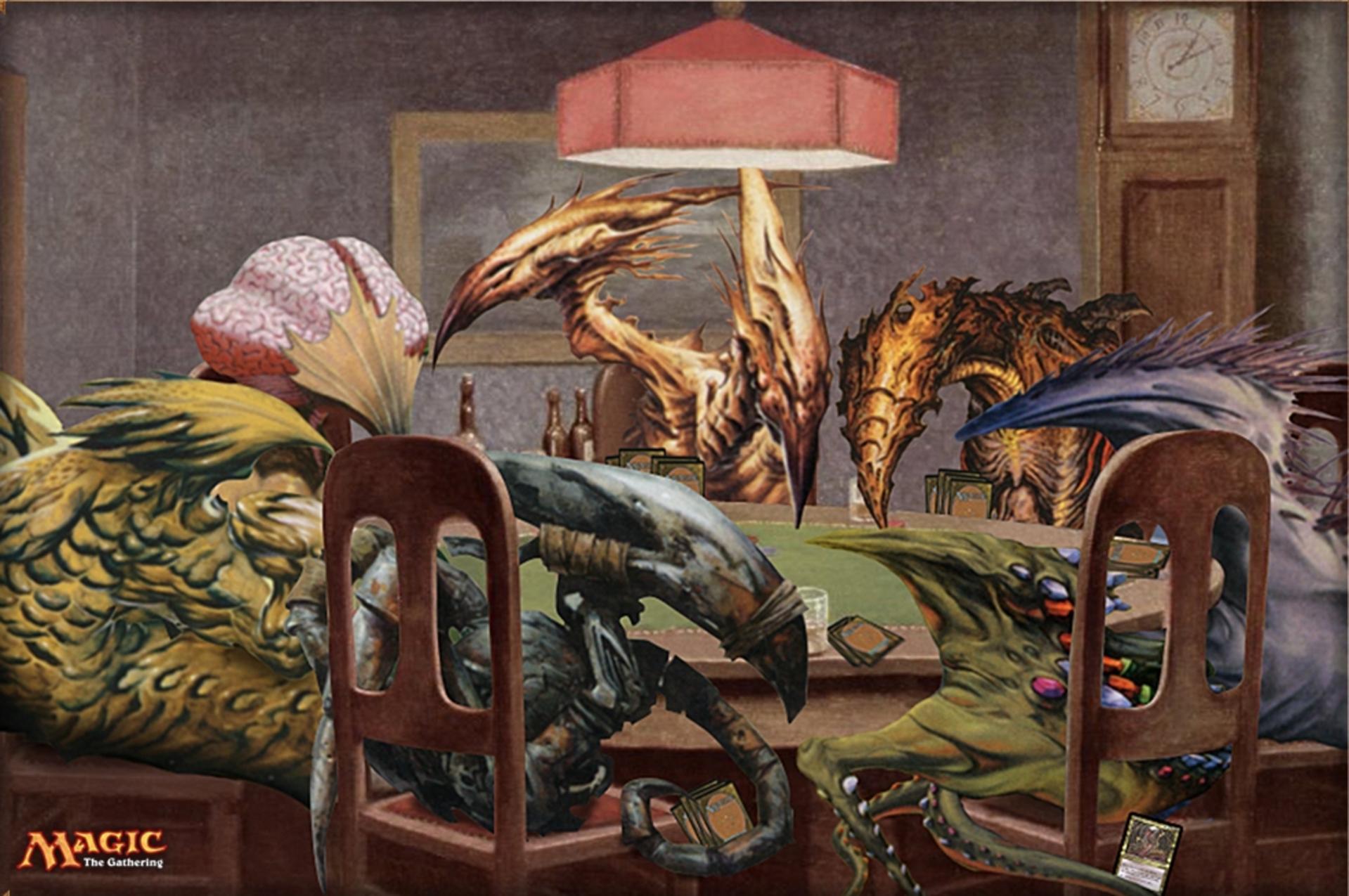 Before choosing to go further you must consider if you are willing to play slivers. Do you want to be focused turn 1 no matter what anyone else is doing? Do you want enough salt from you opponets to kill every snail on the planet twice over? Do you lack a soul and any sense of basic human decency? If you answered no to any of these questions turn around now.

With it now established that you hate yourself and your playgroup enough to play a sliver EDH Let's begin.

I've broken the deck up into seven categories to help show the main purpose of the card in the deck. in some cases, such as Morophon, the Boundless technically fits into both the mana advantage and pump abilities, however, it was included for its first abilitiy, therefore it goes into the mana advantage category.

Feel free to set it to normal categories if it makes it easier to understand. Also, all of the cards are broken down by type below in the primer.

The Lord of the Hivemind

Sliver Overlord, while I know it is the cliche choice it really is the best commander. The tutor ability is simply unbeatable compared to the other legendaries. While I was curious about using The First Sliver, but it's hard to beat the "you can just tutor for it" argument.

Therefore, Sliver Overlord wins for the commander. His tutor ability allows for you to get any sliver you need which can be game-winning or just getting you some quick artifact or enchant destruction. This ability is made even better when Training Grounds is out, making for a 1 mana tutor for any situation

A 5 color Mana Base is incredibly difficult to make, so here is my attempt at it. The base includes all 10 Shocks which give a good variety while still keeping color fixing fast and a mix of various 2 color lands and fetch lands. I will be moving to collecting all 10 fetch lands as time and finances allow me to collect more but as of now I only have 3. We also have several of each basic land to search up with Prismatic Vista or if someone hits us with anything like an Assassin's Trophy. I wont discuss these in detail as they should be pretty self explanatory.

To add to these we have the following:

These include most of our board wipes and recursion

All of these are going to help us out in some significant ways. either ramping us early, buffing our creatures, or fixing colors.

This deck usually wins through one of two avenues- one of the below infinite combos to machine gun everybody on the board down to zero, or through an aggro, creature based damage route, usually by amassing enough slivers and then dropping Sliver Legion and turning everything sideways. If what you are doing isn't moving you in one of these directions then you most likely aren't going in a winning direction. The only exception to this would be interacting to clear away your opponents win conditions or protect your own boardstate.

The biggest thing to look for in an opening hand is color fixing and ramp. We need to be able to cast all of our slivers and be able to get our commander out fast, preferably turn 4 or 5. It is good to have a couple long term payoff pieces like Smothering Tithe or Mystic Remora. This is also a time to play out non combo-oriented slivers, pieces that are not remove on sight and can still advance our board state.

So Sliver Overlord has hit the battlefield, and both it and you are still alive and it's time to kick some teeth in. But what do you tutor for first? This can be a somewhat difficult question to answer. Obviously, if you have to answer an immediate threat , you should do that (ex. Need to remove an enchantment with Harmonic Sliver), if there is not immediate threat, there will be soon, so i usually get out some protection. Provided you can cast him Sliver Hivelord is a very good play, he will protect all your slivers from most boardwipes and let you block without worry. If not, Frenetic Sliver and Crystalline Sliver also offer good protection, or at least keep some of your creatures on the board.

The name of the game of this part of the game is damage and protection. You need to be getting in for damage any way you can as whittling your opponents down is crucial if you want to close out the game. Giving your opponents enough time and draws is going to let them dig for an answer, which leads us to the second part, protection. This is just as important as damage as you want to find answers to your opponents preemptively to keep control of the game. As previously mentioned, you need abilities to keep your guys on the board or at least bring them back. Most of the time, the easy answer to this is Sliver Hivelord as his ability hoses most of the common board wipes. A second important protection sliver would be Crystalline Sliver as it will keep your opponents from removing the Sliver Hivelord. These won't keep you completely safe from cards such as Cyclonic Rift. For anything like this the Frenetic Sliver. This won't keep everything alive (probably) but it should keep at least some of your creatures on the board (again, probably).

Closing Out the Game

Your way to close out the game is to build up to a critical mass of slivers so powerful that you can just turn everything sideways and wipe the floor with your opponents. Provided you can keep your slivers protected and on the board this is actually pretty easy to achieve as with something like Sliver Legion turning all your creatures in to 7/7s or 8/8s.

The other way to win would be to combo out with one of the combos mentioned below, making infinite sliver tokens or tutoring for and playing all of your deck and then making infinite tokens. You get the point.

Sliver Queen + Mana Echoes + Lavabelly Sliver infinite combo engine for infinite colorless sliver tokens and infinite damage and life. Execution: See above, adding that every token that hits the field deals 1 damage and gains you 1 life, allowing you to machine gun down any opponents.

Manaweft Sliver + Intruder Alarm allows for infinite mana of any color, can play your entire deck. Execution: Have Intruder Alarm as well as a haste enabler such as Cloudshredder Sliver, and a mana producing sliver like Gemhide Sliver on the field. Tap your slivers to cast any sliver from hand, this triggers Intruder Alarm, untapping all your slivers. If Sliver Overlord or Sliver Queen is in play then you have the ability to tutor out you're whole deck as every time you play a creature you untap all of them giving you a near infinite source of mana, even without the Queen.

Dregscape Sliver + Frenetic Sliver Gives you a 50/50 chance of keeping a sliver on the board by avoiding the unearth effect. Execution: have Dregscape Sliver and Frenetic Sliver in play and pay to unearth a sliver with Dregscape Sliver. The next time that creature would leave the battlefield activateFrenetic Sliver's ability while the unearth exile trigger is on the stack. if you win the flip, the card exiles and the exile effect fissles, since it no longer has a target. if you lose the flip you sacrafice the creature, sending it to the yard before the exile effect, so it fissles. either way you end up better off with either a creature on board permanently or going back to the yard to be unearthed again later.

These are potential upgrades for the deck. Please let me know your opinion on the cards added as well as what to take out.

Fallen to the Swarm: (Just started this, which is the the reason for the lack of many of these) Elenda, the Dusk Rose (Cortez Cowboys | Elenda EDH), The First Sliver, Edgar Markov

, Arahbo, Roar of the World

Open to any feedback to make the deck more gross or any suggestions for more sins. Big thanks to Art-n-Lutherie for the idea. If you enjoyed any want to help me increase my self esteem with meaningless points on an internet forum feel free to drop an upvote below

Thanks so much for all the support and feedback on the deck! as of right now I am somewhat in a holding pattern due to the current pandemic, and the fallout from it, so the deck will probably not be changing until after Ikoria, and the included commander pre-cons come out. Hopefully we'll be getting some good reprints and/or new cards to further improve the deck.

Specifically, for the near future I'll be looking for more card draw/selection including Rhystic Study, Sylvan Library, Sensei's Divining Top, and Scroll Rack.

Friendly reminder to try and support your local LGS during this trying time, as they are typically small businesses and operate on thin margins. My local store has delivery and curbside pickup but if yours doesn't, try calling and buying gift certificates, or paying in advance for in store credit. The extra cash now can really help them get through to when they can open up again.

In the mean time stay healthy and be responsible. Thanks again for the support and stay tuned for many updates over the coming year!