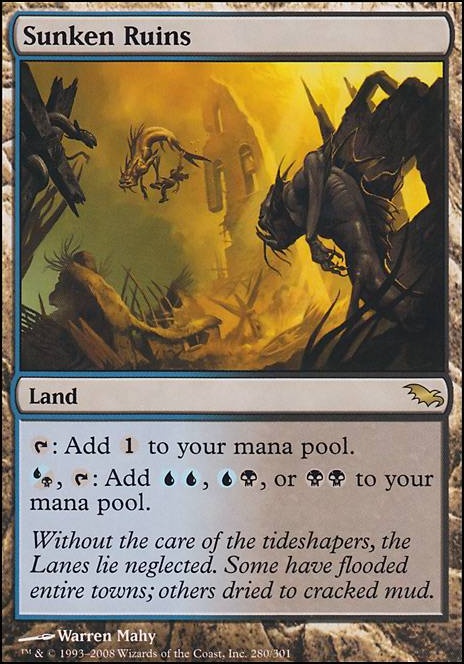 Sunken Ruins occurrence in decks from the last year

Nice Deck! I would just consider adding some of the following lands, but wait! please consider upvoting my deck if these help: Its called Double Trouble EDH! Hope this helps, good luck on your deck!

OONA, Queen of the Combo

Totaly understand the addition of adnauseum as I too once used it in this deck, but that was prior to bringing in Bolas's Citadel and Consecrated Sphinx . I was thinking of removing the Jace, the Mind Sculptor for a faster card as he tends to only be a 4 mana brainstorm that dies the turns after it comes out.

It seems you also run Sunken Ruins in your deck, but also you run 4 less lands than i do which could possibly be the lands you specified above. I could possibly remove Strip Mine and Reliquary Tower and add more cantrips or utility.

Stroke of Genius is another out for me if i don't have the three color mana to cast oona and the 1 color to go off with her, it lets me draw my entire deck, cast all of my colorless artifacts and spells, and follow it up with an oona or Labman (followed by brainstorm) to win the game. Its all so good as an instant speed "kill target opponent."

Consult/Labman has won me many games however I want to add Tainted Pact as another win with it however the lack of basics puts me in a bad position against Back to Basics and Blood Moon .

My largest changes i was thinking of making was removing a few of those colorless lands, remove some basics for Exotic Orchard , Forbidden Orchard and Sunken Ruins . Remove Snapcaster Mage for Tainted Pact and possibly switch jaces to allow for another Consultation win.

Thanks again for the tips and suggestions

OONA, Queen of the Combo

I do have lots to share about what I think about the list. I think that we have different goals in mind - you have more combos in your deck, the list I put together is more lean on the CMC and focuses more on being an efficient Ad Nauseam deck, I notice you don't run this card.

My experience with some of the lands you run is they don't offer too much. Sunken Ruins , Strip Mine , Reliquary Tower , Academy Ruins I have not been big on, and colorless lands in general not called Ancient Tomb I just stopped playing.

I never played too much with Citadel cause I think Naus is stornger in the slot I have for that in the deck. I kept the list I ran to slim combos in Scepter/Reversal and Grim/Power, you run both too. I didn't like Basalt/Rings I felt it was too slow, so I cut it. 2 is good with me. I also found Stroke of Genius mostly redundant and I just use Oona now.

I like Consult/LabMan, and I should add it to mine. I'll do that after I type this up.

Walker wise I dislike walkers in storm but with Consult we should run new Jace.

Most other cards are alright - I cut down on higher CMC things vs. your list, and you have more outlets.

Wow, lots of good card here. It's not every day I see a Candelabra of Tawnos :)

I don't think you're taking enough advantage of having a sac outlet in the Command Zone. Grimgrin's no mana cost sac is his strongest ability.

These Zombies give you value when another Zombie dies, when one is saced by Grimgrin.

Black is too important of the color to have in the early game because the majority of Zombies are black not blue. 10x Island is a lot I suggest cutting lots of Islands and replacing them with other playable Dimir dual lands.

I'm glad you found my comment helpful. That's a good point about Divine Visitation -- it may be a win-more card anyway, and Kindred Discovery seems like a good reason to keep it out.

I do think that you should at least switch the Dimir Signet and Azorius Signet for their talisman counterparts. I say this because casting a talisman when you only have two mana up means you have one available when it resolves, whereas the signets require a mana to activate. (In general, I think the talismans are better than signets.)

My only other advice right now concerns Tainted Pact . You can turn this into a tutor-proper/ Laboratory Maniac win condition if you make your landbase truly singleton. (Since the only way it gets stopped is if you hit two of the same-name basic in a row.) Since you run 17 basics, this would mean changing 14 of them. A good way to start is by making 3 of the 14 into snow-covered versions of themselves; Tainted Pact only cares about names, so Snow-Covered Island and Island are totally different cards as far as it is concerned. (Note that if you want to keep the basic count high, switching half of each basic type to snow-covered will make the Tainted Pact less likely to fail, even with doubles in the deck.) That'd leave 11 lands to be replaced, though I don't think that'd be too difficult if you're willing to invest in your landbase a little. For instance, putting in the fetches you don't currently have would take care of 6 of those slots; more options include Forbidden Orchard , City of Brass , Mystic Gate , Sunken Ruins , etc. Remember that even if you don't go fully singleton, running fewer basics with the same name will increase Tainted Pact 's power.

If you don't want to do that, I suggest cutting Tainted Pact for Back to Basics .

Here is a link to my Yarok decklist: https://tappedout.net/mtg-decks/03-09-19-yarok-the-triggered/

Since your focus is on landfall abilities, Scapeshift and Titania, Protector of Argoth are a great addition. With cards like Prime Speaker Vannifar , Birthing Pod , and Neoform , you can tutor out bigger creatures to the battlefield at the cost of weaker creatures.

To help you ramp more, include Priest of Titania as she provides (X) green mana for the amount of Elves in play (including opponents).

I'm sorry to be the bad guy, but this deck is far too slow to be competitive. It may be in your local meta, but it will be eaten alive in a tournament.

I can tell you like desertion given your artifact selection. There is only one word to describe that card. BAD. Take it out.

That's all I have for you. It's a decent deck. I like the build outside of the artifacts, counters, and lands. Change them up and you'll be amazed how much better this deck will become. It'll be significant.