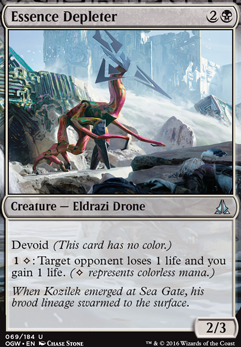 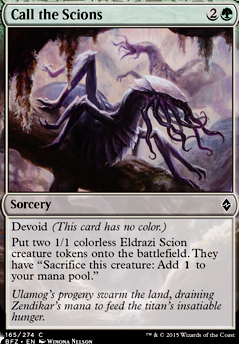 With only 3 lands that can even provide the correct mana to activate Essence Depleter. I would have to suggest swapping it for Underworld Coinsmith if you want to keep the same effect. Otherwise remove it all together.

Also, lands that kill: Piranha Marsh and Sunscorched Desert. (But throw in Seraph Sanctuary, too.)

Unmask_Art, I have been playtesting this deck primarily against aggro decks and ran into the same problem: Trying to hold on until I draw a Dusk, then regroup with Dawn next turn.

I have also found that winning without Panharmonicon is quite easy, so in many games it was just a dead card as whatever else I had in my hand was better at the moment. In addition, I have found that Ondu Cleric is the least useful creature in the deck, and isn't good for much except chump blocking if you don't have a Cliffhaven Vampire in play. I dropped one of those for an additional Dusk. I have been running a pair of Altar's Reap instead of Live Fast and I am quite pleased with the result. I can block, then sac the creature before damage to cast Reap. Alternatively, I have had one or two Zulaport Cutthroat on the field with a Cliffhaven Vampire and cast Reap, which creates a gain of 4 life, a loss of 6 life to my opponent, and two cards in my hand.Lastly, I decided that a pair of Shambling Vent were good as backup creatures with lifelink for Cliffhaven Vampire triggers.

On a side note, I'm also toying with the idea of incorporating Essence Depleter and possibly Dominator Drone, but that may be another deck entirely. =P

Hey! Looks like a cool deck! I have a few pieces of advice for you:

Eldrazi Displacer + Emrakul, the Aeons Torn doesn't get you infinite turns, as Emrakul's "take an extra turn" clause only triggers when you cast it, not whenever it enters the battlefield.

In addition, your deck is currently 108 cards, so I'd take out the following:

That should take you down to 60 cards, at which point you might want to consider taking out a few other things and adding some of the Eldrazi Drones from Rise of the Eldrazi to give you some more Eldrazi Spawn / ramp.