As an additional cost to cast Eldritch Evolution, sacrifice a creature.

Eldritch Evolution occurrence in decks from the last year 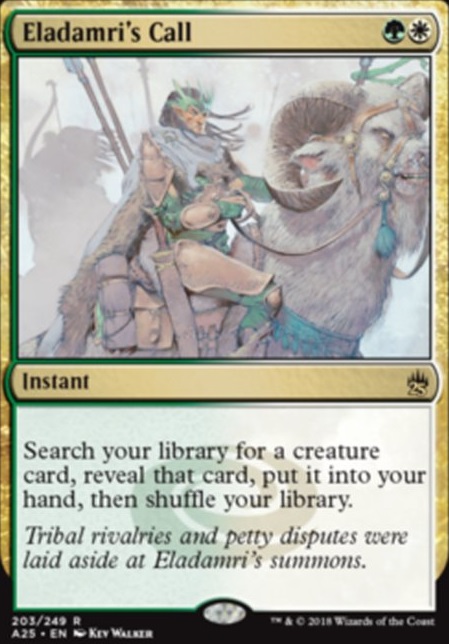 Meren would like to bring a friend
by bmcconnell11

Meren Damn you Hulk
by sabon

With elves ramping into more ramping elves and creating a snowball effect with your mana base, I personally think you can do without the mana rocks.

Fauna Shaman is a good way to find the creatures that you need to help set up your plays, in exchange for discarding a creature.

Prime Speaker Vannifar is another way to get your pieces straight on to the board by sacking a creature. The main drawback is that you will need a turn for her to overcome her sickness. If you can find a way to continually untap her to abuse her sac ability, you can make your way to the Hulk.

Neoform and Eldritch Evolution are also effective ways of bringing out combo pieces straight from your library!

You will get a vote from me!

Have you ever thought about adding in Chord of Calling, Greater Auramancy, Birthing Pod, Natural Order, Craterhoof Behemoth or Eldritch Evolution?

Massacre Wurm and Sheoldred, Whispering One are nice cards for some removal that you can replay. Sheoldred is also nice cause its pretty much having two merens. I enjoy the massacre wurm cause it can also be another way you can win the game.

Westvale Abbey Â Flip is a nice sac outlet that can get ya a big demon. Diabolic Intent and Eldritch Evolution are nice ways to kill your creatures and get something from them as well.

Pernicious Deed is one of the best boardwipes in the game.

These should be good for you

@Conaxi4783 - Thanks! it took about 4 hours just finish the description and about 2-3 days to finish the initial decklist.. Reanimate is a bit expensive, but if I have more budget, I'm definitely adding that..

@vediusmaps - True, but i only have 1 for my Willowmaker deck.. I might add it in the future.. I only chose Back to Nature and Dead of Winter for versatility of removals.. Thanks for the suggestion though..

@hamdeadly - i think Diabolic Intent and Eldritch Evolution is counterintuitive imo, since i don't want to sacrifice possible fodder for Jarad, to find a creature in my library.. Also since my graveyard is the zone where i would most likely get the best odds of finding a solution to the current situation.. Plus i have other tutors which can add creatures to my yard such as Jarad's Orders and Final Parting.. Demonic Tutor is good, but i currently lack the budget to buy one.. I'll definitely add that though in the future.. Thanks for the suggestions!

how about Diabolic Intent, Eldritch Evolution or Demonic Tutor for more tutors. although i'm not quite sure what cards to replace for them. just some options.