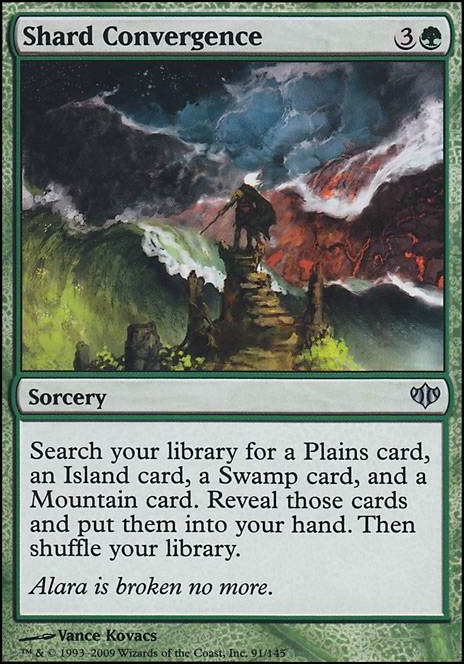 Search your library for a Plains card, an Island card, a Swamp card, and a Mountain card. Reveal those cards and put them into your hand. Then shuffle your library.

Shard Convergence occurrence in decks from the last year

Golos goes to Disneyland
by Prospekt 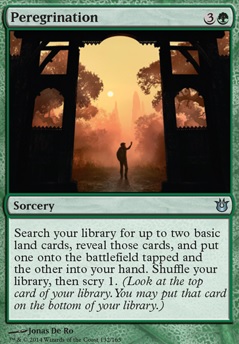 for five color decks with weaker land bases (i.e. no fetches for color fixing and limited dual type lands) you gotta make up for it with ramp spells, no way out of it unless your RNG is amazing and you put some work into the math of your color cost curve. the bfz lands are pretty cheap like Canopy Vista , or you can go for the spell route to color fix, one of my favorite is Shard Convergence tho it is a bit slower.

How does this play with the 5 colours? Is the rocks enough? What about an Urborg Elf , a Quirion Explorer ? or a Shard Convergence , Seek the Horizon or Gaea's Balance for mana fixing?

Of course Birds of Paradise is better, but depends on your budget :)

@frezzreaper: Just a log in case you still care. Still no need for help currently; Trying to find ramp that doesn't need to target Basics as it is... Regarding Time Spiral, I even added Leyline of Anticipation + Vedalken Orrery for Mass Flash, & Day's Undoing as an instant speed alt. For something I can't even afford. From there, I also added some tutors, unless they really blow hard: Wargate, Dark Petition, Diabolic Revelation... I dunno if they're any good, but for other Ramp, Genesis Wave, Exploration, & Burgeoning is what I can think of. Other things I can think of are Farseek, Spoils of Victory, & Shard Convergence. Not too sure about your thoughts on Perilous Forays & Prismatic Omen, but I would like your thoughts. Quite a bad job at finding Draw Spells, I am. People usually use stuff like Phyrexian Arena, & Sylvan Library, but someone told me a gutsy, albeit smart decision to exclude both. That said, Rhystic Study stays though...

1: Cut some Walkers; & some support to lessen the load of Walkers. & Infinites.

2: Try & lessen the amount of infinite combos from the Walkers at least...

3: Wonder Why only 5 Wraths are really needed, as well as only 5 Draw (Should be more...), 10 Accelerants, & no amount of needed Tutors, all while getting to help at the current time.

4: Wait for Ethereal Absolution as support for both Humility, & Mirari's Wake...

Sorry to say, so many Walkers alone have potential for such a thing as Wincons at the many. Though I'll see what I can cut though... ;) Later.

You may wish to run at most five ramp spells in this deck: Kodama's Reach, Shard Convergence, Seek the Horizon, Rampant Growth and Explosive Vegetation are staples in this. You might also wish to consider Wild Pair. Muddle the Mixture is a counter spell and is on theme. I hope these have helped!

Arcean_Novalogic, thanks for the comment. Shard Convergence looks amazing - it finds all the lands which would essentially fix my manabase almost instantly for relatively little mana. However, your assessment was correct - it's far too slow for the "competitiveness" I seek with this build. This card would be busted if it also said "and put them into play tapped", even though I wish it did. The art is so much better than those stupid looking elves in Skyshroud Claim. I really dislike the art, and wish there was a viable other or better option. Thanks again for sharing Shard Convergence, do you have any other cards you'd suggest?

What do you think about swapping Skyshroud Claim for Shard Convergence? I assume the latter putting them into your hand is too slow even though it finds twice as many lands?

Ravenrose: Because this is a Canadian Highlander deck, mana cost for cards is very important. 4 mana is a lot to spend on Shard Convergence which ultiamtely just fills my hand with land. At the same cost I have cards like Siege Rhino and Hero of Bladehold which very quickly can close a game out.

I used to run a counterspell package but ultimately cut it for more proactive hand hate (like Thoughtseize) as the counterspells were too slow. The problem with Rewind is that the card is a bit of a trap. The idea of it being a "free" counterspell is only true if you have a decent selections of spells that you can play with it at instant speed, otherwise it still just costs 4 mana (at the end of your opponent's turn, any unspent mana is wasted mana). Apart from that, it has a huge outlay to cast. 4 mana means that I won't be able to do anything else, so I just have to sit there with mana up and not play threats. And playing threats keeps the pressure on my opponent. Compare the idea of being able to counter one of my opponent's spells versus say playing a Bloodbraid Elf and then cascading ito addiitonal value.

Wild Pair is far too slow here. And it is then reliant on me playing creatures. Tutors like Eladamri's Call on the other hand allow me to just fetch a creature, so top decking call would guarantee a creature, but topdecking Pair means another turn before I can potentially get one. And another turn is an opening to for my opponent to make me dead. Plus 6 mana is a lot to invest in a spell that isn't game ending by itself. I would much rather in the cost bracker get something like Dragonlord Ojutai who is a lot of flying damage and provides the deck with more tempo.