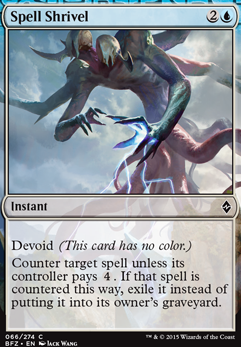 Counter target spell unless its controller pays . If that spell is countered this way, exile it instead of putting it into its owner's graveyard.

Lost to Eternity
by IcyLightning

Vorel of the Hull Clade
by MagnusTheFirst

Letâs Take a Swim
by Spicycloud5 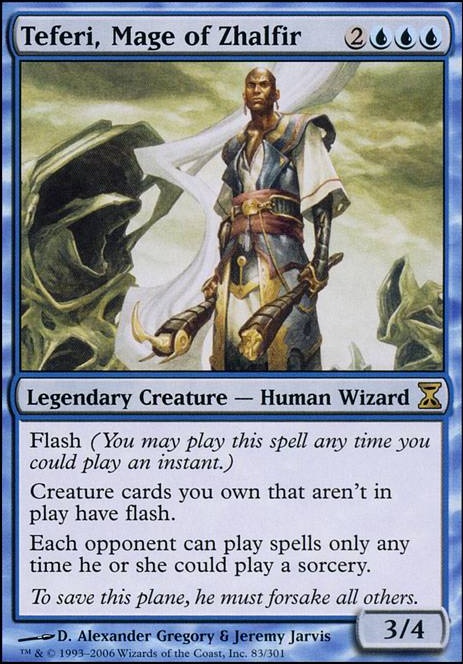 Bring on the end of the world, Animar
by Foreigner

I agree with Pat with all of these, the only maybe isGeode Golem, which I like in my Bosh deck, but with Saheeli being only 6 mana it might not be worth it.

I would sawp Gauntlet of Power for Caged Sun (would save you about $11) I have never been impressed with Blinkmoth Urn, even in artifact decks. You would be surprised how much it can help your opponents, especially if you need tap out to to play it.

I would try to make room for Pilgrim's Eye

Brudiclad, Telchor Engineer, Jhoira's Familiar, Tawnos, Urza's Apprentice, Mindlock Orb, Orbs of Warding, Truth or Tale (this one especially is total garbage), Essence Scatter, Opt, Frantic Search, Magmaquake (there are a lot of earthquake effects that don't negatively synergize with your commander like this does), Remove (Not sure if this is even in the deck), Spell Shrivel, Syncopate (there are way better counter spells)

I really like the card Steal Enchantment I'm surprised I haven't seen it in other decks before.

I also think you need at least one or two more lands. 34 is really low.

Hope you don't mind some suggestions from ya boi Owen. I've looked thoroughly through your list and have some ideas to propose to you. Totally up to you whether or not to use these cards (I won't be offended either way- at the end of the day this still looks like a solid, fun list!). But here are some suggestions:

Anywho- those are my recommendations! Hope they help and I'm really looking forward to seeing you play this deck! Sorry I went into so much gross detail about my suggestions but I really do love looking through lists and then writing about them.

Swiftfoot Boots is another good equipment.

All of the cycling lands and the mirage fetches are good: Flood Plain, Bad River, Irrigated Farmland, and Fetid Pools.

Trinket Mage fetches for 1 or less so Ancient Den an Vault of Whispers are a goo include, and Welding Jar might not be bad either. Also it could fetch a Phyrexian Dreadnought to combo with a Torpor Orb, Nimble Obstructionist, or Stifle.

Absorb, Counterspell, Cryptic Command, Daze and Undermine are all better than Cancel or Spell Shrivel. Countersquall might be worth a thought as well.

Some mana rocks that could help are: Commander's Sphere and all of the signets (Azorius Signet, Dimir Signet and Orzhov Signet). Fellwar Stone also helps with fixing for your opponent's mana.

And finally Sorin Markov would make a great planeswalker.