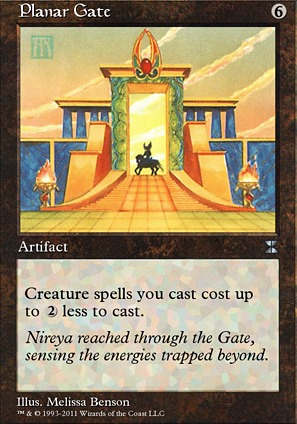 Creature spells you play cost up to less to play. 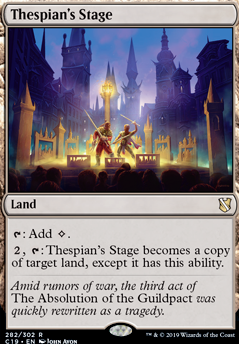 Revenge of The Fat Ones
by FateController17

Cloud Key, Urza's Incubator, The Immortal Sun, Herald's Horn, Pearl Medallion, Oketra's Monument, and Planar Gate (if you're rich) are all cards you can consider to speed up the play of your Suuuuper fat stack of creatures.

Knight of the White Orchid, Weathered Wayfarer and Land Tax are ways to make sure you keep up with the Joneses with the weak draw you've got. Tithe Works, too. These aren't true ramp because you have to be behind in land drops for them to trigger for positive gains. You're going to have to rely on more rocks: Sol Ring, MindStone, Fellwar Stone, Thran Dynamo, and Gilded Lotus should probably all be in here.

Hopefully that'll get you the speed to make you more scary in the middle.

I feel like Wrath of God and Armageddon should be in here, and maybe Faith's Reward for maximum flavor.

With the mana I really struggle to be content. First, I have to say that I could not playtest the deck yet and even though I already own all the cards, I can only make best guesses. The big question about Planar Gate and Worn Powerstone i of course, how many creature spells I do each turn and also, at what stage during the game. I also admit, that Planar Gate was in my card collecton catching dust and I wanted to play it. But thinking of te situation, I will for sure consider exchanging it for the Worn Powerstone or a similar mana rock.

ATM I count 8 enrage enabling cards. Some of these are fight-cards, that are alse removal and that often can be repeated. Caltrops seems like a great idea, as soon as I find out what to kick out :D

Thanks a lot for your input!

also you don't have lots of card to ping your dino and activate enrage yourself, perhaps you can have a use of cards like Acorn Catapult, Caltrops or Outpost Siege ?

Gishath's Park: A Commander who Cares