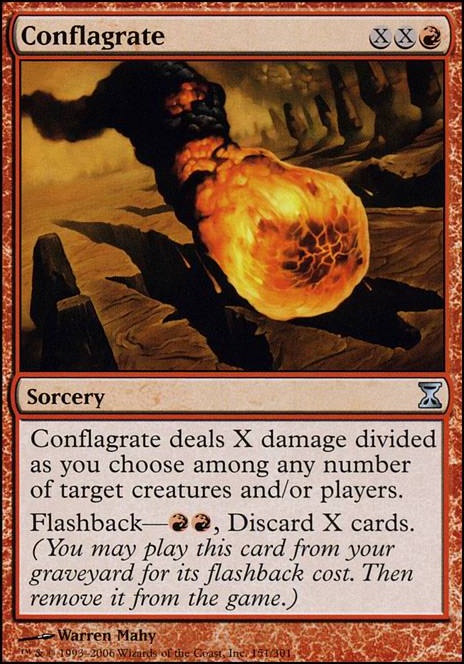 Conflagrate deals X damage divided as you choose among any number of target creatures, players and/or planeswalkers.

Flashbackâ, Discard X cards. (You may cast this card from your graveyard for its flashback cost. Then exile it.)

Conflagrate occurrence in decks from the last year

Theros Beyond Dredge
by SmartToad 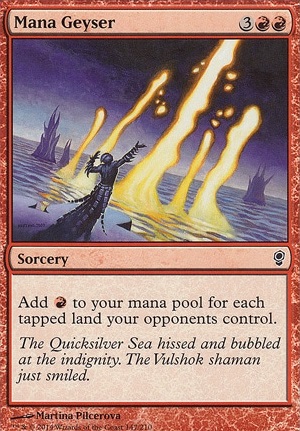 Snivy__, Treasure Hunt does work for Conflagrate & Zombie Infestation . I'm using Treasure hunt to get cards in my hand, yes I'm not drawing them, but I still get cards in my hand which is what matters. Then I can discard thoso cards to use Conflagrate & Zombie Infestation very effectively. I'm still looking to replace Psychosis Crawler though, as making 1 big creature isn't really effective.

Thanks for the comments and recommendations. I'll try and address all of your points one by one.

Let's start with Hexdrinker . He's nice as a mana sink but otherwise is a Dryad Militant with no text. I understand once you pay to level up a couple times it becomes "good", but my problem is I dont want to have to pay more mana just to make it playable. This is assuming it's not killed in response to the last level up attempt before pro instant (which I understand is just worst case but still something to think about). In addition once you do get it to pro instant you can no longer use pump spells on it if it's the only lethal unblocked creature which is also a problem. All this in addition to the power of Dryad Militant itself. I say this because it's the most likely slot for Hexdrinker . Dryad Militant exiles random key cards from certain matchups that just makes things so much easier. Ex: Creeping Chill , Conflagrate , Past in Flames , Lava Dart ...

Next up Pithing Needle is a generally useful card as it can be brought in against many different decks. I've definitely played it in other iterations of this deck. I like Shapers' Sanctuary as it provides card advantage against removal heavy decks like jund and control so that you can keep producing threats.

I very much dislike Force of Vigor as you have to lose out on a card to even use it. Stompy cannot overcome losing out on an extra card that could be another threat or finisher spell. I understand that the loss of the card is ment to be used in a do-or-die situation. If you need it to simply slow down your opponent and it's not do-or-die and just on the spot removal then you lost out on an extra card.

Finally, Relic of Progenitus . I actually quite like your recommendation here. The incidental card draw does seem super relevant from graveyard hate. I like Wheel of Sun and Moon as it's a permanent that provides decent devotion in addition to the graveyard hate. It is almost a joke, but it can also be helpful against mill. I'll probably test out Relic of Progenitus once I'm done testing with Once Upon a Time and Syr Faren, the Hengehammer (dont want to be testing too much at the same time otherwise it's hard to attribute successful tests properly).

Hope this answers your questions. I appreciate you commenting and choosing this primer to discuss Stompy.

Any thoughs on Finale of Promise , Conflagrate , or Geier Reach Sanitarium ?

@sylvannos: Jeez, so many One-times; several remain I'm unaware of. Anyways, 3 Opponents would be the dead minimum, but since I've no real playgroup (Much less a Gameshop for such, as well as the fact I'm emulating the idea of an average board over 4 Players; including myself. I threw in a crapton of X-Burns; but I may have left out 3 key cards for that: Conflagrate , Bonfire of the Damned , & Avacyn's Judgment . Any of these X-Burns worth it, or am I using too many as it is? Also curious about the following: Browbeat , & Risk Factor . They're one use, but puts opponents on a gamble; throw in enough damage, maybe they'll think twice about damaging themselves to prevent me from drawing 3 cards. I suppose it's a "No." for the latter two?

No. Neither Cordial Vampire nor Gifted Aetherborn will be saved in this situation.

When resolving spells and abilities, you resolve them fully before anything else can be put to the stack. In this case, Conflagrate will deal its damage to both Cordial Vampire and Gifted Aetherborn at the same time.

For Reference: 608.2j If an instant spell, sorcery spell, or ability that can legally resolve leaves the stack once it starts to resolve, it will continue to resolve fully.

Then, before anything else can happen, State-based actions will be checked and all SBA's happen simultaneously. Due to this, SBA's will move both Cordial Vampire and Gifted Aetherborn to the graveyard as they will both die to lethal damage.

Question I have involves Conflagrate and Multi-Targets. Let's say Cordial Vampire and Gifted Aetherborn are targeted.

If so does the person casting the spell or the person with the targeted creatures choose which one stays on the board with the counters?