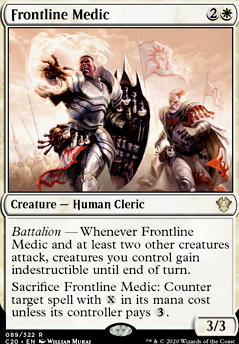 Battalion â Whenever Frontline Medic and at least two other creatures attack, creatures you control are indestructible this turn.

Sacrifice Frontline Medic: Counter target spell with in its mana cost unless its controller pays .

The Prismatic Bridge
by Flodoo

Akiri, Warsong of the Sky Ruin
by ghostfire86

Elouise, Nephalia Sleuth: Meh, I feel it's a bit overcosted. But sure, you can probably fill your graveyard quite rapidly with misc. token sacrifice

Curse of Unbinding: I was excited until I saw the mana cost. Oh well, at least it's funny against those Polymorph/Proteus Staff decks

Somberwald: I'm dissapointed that this is the only Wolf token maker in the product. Overcosted too.

Curse of Clinging Webs: I'm just glad Spider tribal is getting something, even if this feels more black

Celebrate the Harvest: I feel Harvest Season is way easier to abuse

Wall of Mourning: Not Bob but not bad either. Gogo flicker.

Moorland Rescuer: Not too bad even if black can do this way more efficiently. Gogo pumping

Totally on board with a non-Modern version! Personally I was going to build mine as a casual deck.

I saw your updated description, and unfortunately, Brave the Elements doesn't protect against Wrath of God, since Wrath neither targets nor damages.

A couple options that do work: Unbreakable Formation provides instant-speed protection when you need it, but at sorcery speed, it makes for a potent offensive card, with that permanent buff and vigilance. Unfortunately, between Formation and Wrath, that's 7 mana in one turn, which is pretty steep.

Frontline Medic is similar to Selfless Spirit in that, once it's out, it's a free activation to gain indestructible. There's obviously pros and cons to each â 3 mana vs 2, repeatable vs single use, waiting a turn to attack vs available the turn you play it, keeping the creature vs sac'ing it, restricted to combat vs instant-speed â so it cones down to your personal playstyle and preferences (or I guess, your partner's).