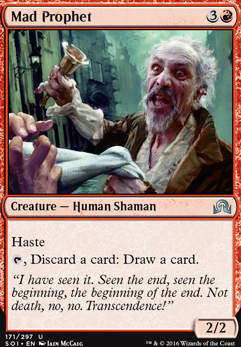 Palisade Giant can be a great fog engine to frustrate your opponents. Gift of Immortality will save you some headaches if Alesha dies. Mad Prophet is perfect for getting high mana creatures in the graveyard early to cheat out with Alesha, with the added benefit of card draw. Panharmonicon would be great with all your ETB triggers.

jdc yeah, that could be a good idea in a meta with many burn deck, but don't forget that you actually have to put that in the graveyard, and Faithless Looting and Mad Prophet fulfill that purpose