Whenever Neheb, Dreadhorde Champion deals combat damage to a player or planeswalker, you may discard any number of cards. If you do, draw that many cards and gain that much R. Until end of turn, you don't lose this mana as steps and phases end.

Neheb, Dreadhorde Champion occurrence in decks from the last year Torbran Strikes Back (burn y'all)
by Admiral_Larimda 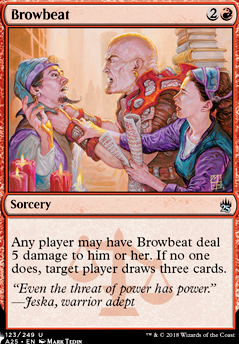 also just for the memes im running an Akroan Horse but if you find it funny knock yourself out.

@Snap157: Library used to be in the deck; it was pretty nice especially with Experimental Frenzy, but I found it wasn't usually worth the slot. When I first brewed this deck it was much more focused around Grimoire, so I wanted to make sure there was as much stuff to hold onto it as I could get, but currently the deck doesn't care enough about any individual cards to have it worth a spell to not discard particular things.

@Goblin_Guide: Perpetual Timepiece used to be in the deck but other than that I am able to churn through the deck fast enough with cards like Neheb, Dreadhorde Champion and Avaricious Dragon that I found I didn't really need it or other things like it. Codex Shredder is the only holdout of that kind. As far as mass reanimation, nothing comes to mind other than Scrap Mastery, are there others you think could be a good fit?

Ignite the Future is a solid piece of impulse draw (term for exile and casting for a brief period of time) that comes back later in the game for incredible value.

Nykthos, Shrine to Nyx is a strong ramp piece if you have a lot of colored permanents with mana symbols.