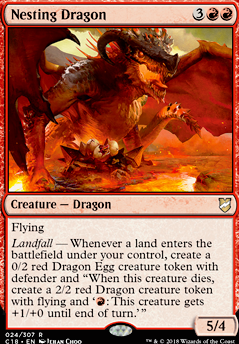 Nesting Dragon occurrence in decks from the last year

If these trees could talk

I took some pointers from your deck and added Nesting Dragon, Undergrowth Champion, Cataclysmic Gearhulk and the The Ozolith. Also i've always liked Eldrazi Displacer for his ability to blink creatures. I can do it to an attacking creature or on my own boys and get multiple ETB triggers.

Alright here are a few things I notice that will help tune up the deck to help speed it up, as well as improve consistency overall.

Tapped lands are the bane of any deck as far as speed goes. Switching these out for lands that enter untapped will speed things up as well as provide better consistency for color fixing. If you are going to include a tapped land make sure it provides insane value (Valakut for example, or Mosswort Bridge in big creature heavy decks) so the drawback of the ETB tapped is worth it in the long run.

Nesting Dragon- Not a bad card but Dragonmaster Outcast is cheaper and will provide you with more consistency in the mid to late game.

Scroll Rack- A good card, but you have no real way to abuse it, and it is really nothing more than a replacement effect since your top deck manipulation is based off of high CMC creatures. Damnable Pact would provide you with a better way to refill your hand, and you seem to havew enough lifegain scattered through out to offset the life loss.

The Mending of Dominaria- It is a high CMC card that is fairly easy to remove, keeping you from getting the third trigger off and negating the power of the card... I would suggest Abundance since you are running Sylvan Library. This will allow you to replace the downside of Sylvan Library (pay 4 life to draw extra cards) and help you sculpt your hand for what you need in the moment. (Basically those two cards together read- At the beginning of your up keep draw three cards, naming land or non land for each draw. It is an awesome replacement effect need to be running Abundance)

Ranger's Path- It costs 4, and the lands enter tapped. You have a decent enough ramp package going already and i don't feel like you need the redundancy here. I would suggest adding Blasphemous Act or Black Sun's Zenith to give you another board wipe since you are running slightly light on those. Both are good cards just depends on which style you might need... Black suns will get around indestructible, while Blasphemous will normally only cost you one mana. Or run both if you play against mainly casual (ie big creature) decks.

The only other big thing i notice is a lack of single target interaction for Artifacts and Enchantments. Cards like Vandalblast, By Force, Force of Vigor, Return to Nature, and even Caustic Caterpillar are great removal if you find yourself wanting to increase your interaction.

Overall I dig the deck for what you are going for. Let me know if you have any questions about my suggestions are anything overall. Hope this helps some

Field of the Dead & Nesting Dragon give more bodies