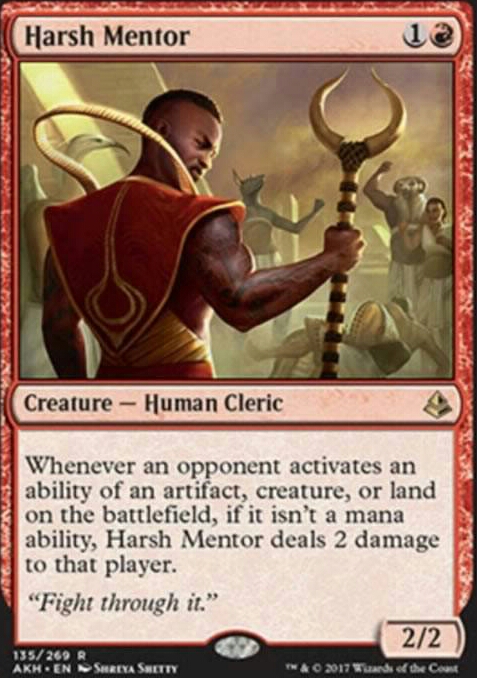 Whenever an opponent activates an ability of an artifact, creature, or land on the battlefield, if it isn't a mana ability, Harsh Mentor deals 2 damage to that player

Harsh Mentor occurrence in decks from the last year 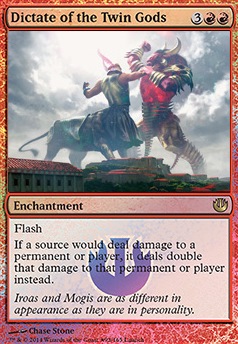 Hi OLucas ! Harsh Mentor could work! I almost put it in for the Goblin matchup, but ultimately went with Anger of the Gods instead!

FormOverFunction on What are your favorite underused, ...

My decks are terminally bad (but themely!) so my contributions will be limited in value, but here are some of my favorites: Transmutation Encrust Artificer's Hex Iceberg Rain of Gore Corrosion Heat Stroke Harsh Mentor

Sultai_Sir on Modern to Commander

I'm actually going Bant with Chulane, just to dump a bunch of Hatebearers on the ground super fast. The only notable cards Black and Red add in terms of humans are Harsh Mentor, Imperial Recruiter, and Kitesail Freebooter. I'll have it posted today!

Remember, there isn't enough cards in the game for you to support doing this exclusively; and it would be kind of weird. The only thing you do is stop instant speed spells. Hope of Ghirapur might help as well. Harsh Mentor discourages abilities and those are instant speed usually.

So you do want some other gameplans, and marisi goads people, so now you've got a filler mechanic, next you add Gahiji, Honored One and you've got a good theme that will give you some actual wincons. You're in Naya colours so you'll have no shortage of strong creatures to pick from for a big beatdown + pillowfort/goad package.