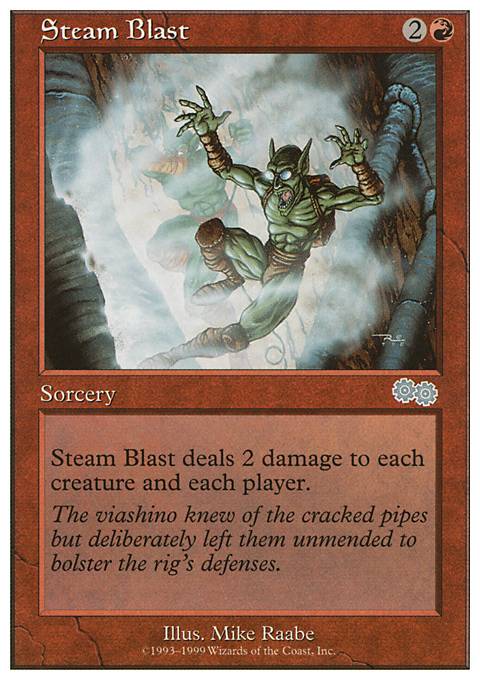 Steam Blast deals 2 damage to each creature and each player. 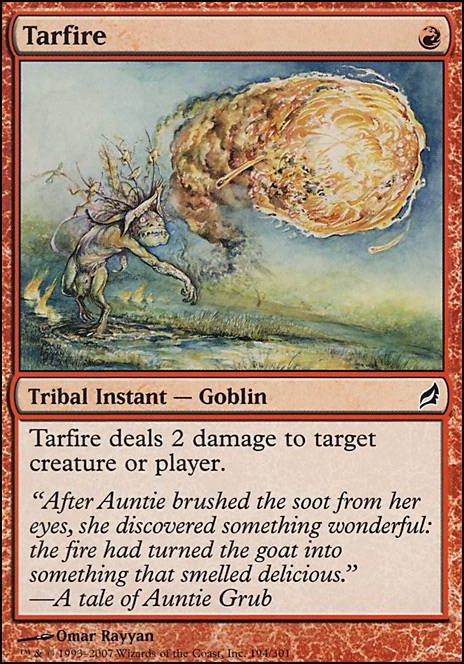 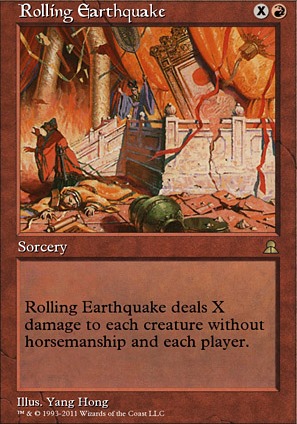 Torbran the exterminator
by yumadkid

PookandPie on How can I bring Superfriends ...

Browbeat can be... okay. Generally speaking, it's bad to give your opponents a choice, but you'd be more apt to decide on whether or not to play that card based on your playgroup. Taking 5 (or even 8) damage is usually chump change in comparison to denying someone three cards that could potentially do more damage or enable an infinite combo, after all.

Anger of the Gods has several cards of similar function. Slagstorm, Flamebreak, Steam Blast, things like that.

Faith's Reward is a reasonable card, and Oblivion Stone is solid. If you happen to draw both, they're phenomenal, but only if you have 9 mana. That seems a little bit tough to reach, to me.

To explain Chant of Vitu-Ghazi:

The lifegain traces back to the white instant, which is why FaS's ability triggers in this case, but not in the case of Spiritualize (which was a delayed trigger, not the spell itself). Note that a new ruling may very well change this as Dominaria's still a ways away.

Anyway, the big thing about Chant of Vitu-Ghazi is that, if you control AEtherflux Reservoir, you can turn the infinite life you gain into arbitrarily large amounts of damage.

To explain the Hallow combo, you cast FaS, and with them on the stack, cast Hallow targeting them. Even after FaS resolves, Hallow will continue to affect FaS until end of turn. The relevant rule here is 400.7b, which reads:

Hallow functions the same way as FaS do, except it's not as safe to just outright attack with FaS as it is with Chant of Vitu-Ghazi (as the latter prevents all damage from all creatures, and Hallow just prevents the damage from your own).

Deserted Temple is good, but in order to generate infinite mana from it, you need a land that produces multiple mana at a time and a way to either untap it, or copy the untap of the Temple (like Rings of Brighthearth). Boros isn't so great in the realms of lands that tap for multiple mana: You have access to Serra's Sanctum and Nykthos, Shrine to Nyx, but I don't think you run enough colored permanents or enchantments to make those work. You can run Deserted Temple, but I don't think you'll get infinite mana out of it in Boros colors that easily. It's pretty awesome with Maze of Ith, though, if you want to try running that.

Counterspell, Lightning Bolt, Murder, Path to Exile, Hunt the Weak this is a very simple version of removal. I playtested your deck and 4 other decks, it lost every single time. First off look at your board, your deck is full of 2/2's or 1/2 or 3/1, they could just play a Volcanic Fallout or Steam Blast and you'd lose every creature you had. Your 'BOMBS', cards that will win you the game, have no protection, ways to keep it from dying or being removed. You have no way to get rid of opponent bombs so if i cast a Primordial Hydra waited 6 turns or so i'd kill you with only one creature and thats just six turns. I am trying to be nice about this but your deck is terrible, it will only win against people who have never played Commander and just think that they need a hundred card deck and a legend and build something like this.