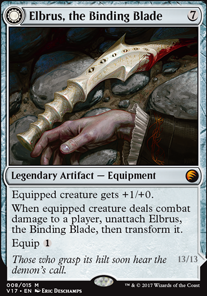 When equipped creature deals combat damage to a player, unattach Elbrus, the Binding Blade, then transform it. 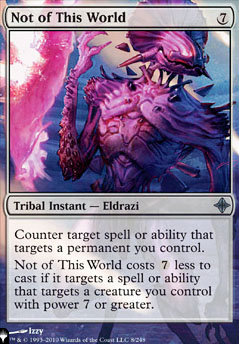 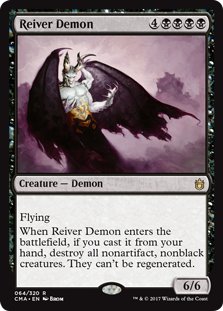 griffstick on MDFC Sorcery in Strixhaven

If this mdfc cards can be your cmdr then why cant Elbrus, the Binding Blade Â Flip / Withengar Unbound be your Cmdr?

I think that last edit I'm gonna make to this deck us upgrading the mana base with off colored fetches. Maybe. I'm not a big fan of off-colored fetches just from a flavor perspective but I think the deck could use more mana fixing. I think it's hit a pretty good point where I just want to play it rather than brew more. I don't really know where it could go from here. I also think it strikes a good balance between being a Kadena deck and a Phage deck. I'll probably update the description at some point to reflect the changes the community has helped me make. Only other thing I'm thinking about is replacing Elbrus, the Binding Blade Â Flip for a more reliable finisher if I can't get it to work in real games. Probably with Beastmaster Ascension and have another way to win with morphs. Thank you to everyone for your suggestions and knowledge, you helped this deck reach it's full potential.

Polaris on With an Umori [Planeswalker] companion, â¦

Neotrup is right, but also remember Commander is a casual format and you can negotiate with your playgroup. If you let them know what you're thinking of, they might agree that it's cool enough to allow (I had a friend make a deck with Elbrus, the Binding Blade Â Flip as commander once worth the flavor of it being a cult trying to release their master).

A few cards exist already that grant bonuses for killing other players:

Hiya! Elbrus, the Binding Blade Â Flip has a black color identity (because of the back), so it's not legal in your deck. I would up the land count in your deck, otherwise you're gonna have more hands where you miss land drops. I would play as many ways to protect Wyleth as possible, so cards like Giver of Runes, Mother of Runes, Deflecting Swat, etc.

d_iros: your experience with what's underperforming should be your foremost guide, but here's my take:

Crystal Shard: Obviously versatile, but not essential. Does synergize minorly with Scroll of Fate & creature ETB triggers like Kadena tho

Mistfire Weaver: seems pretty mediocre, although it hurts a bit to cut a morph card

Elbrus, the Binding Blade Â Flip & Lord of the Void: kinda mediocre, and cutting down on either would lower the average CMC. The Scroll helps with expensive stuff tho.

Not making your life easier but you might consider Vivien, Champion of the Wilds & Mystic Forge too

Cool take on the deck, I think you're going with a light cat subtheme? But I see some issues with the list: Elbrus, the Binding Blade Â Flip's color identity is black, so it doesn't follow normal commander rules; Emeria Shepherd seems to be a bit too expensive to run with 35 lands; I'd suggest putting in Auriok Steelshaper, seing as you run several creatures that want to be equipped; you might want to include artifact and enchantment wipes, even though it'd seem counterproductive to do so in a deck like this- cards like Austere Command and Cleansing Nova. Happy tapping! :p

Anyways... Based on Eutropia the Twice-Favored

Equipped creature has +0/+1 and "Whenever an enchantment enters the battlefield under your control, scry 2."

If the equipped creature would die, you may reveal a card from your hand and the top of your library, if they are both enchantments, exile that creature instead. Transform Augury Bowls of Nylea and Thassa.

Eutropia, Seer of Trees and the Sea ()

At the beginning of your upkeep, name a card. Reveal the top card of your library, a card with the chosen name is revealed this way, you may put it into your hand.

Whenever an Island enters the battlefield under your control, you may reveal an enchantment from your hand, if you do, target creature gains flying until end of turn.

Whenever a Forest enters the battlefield under your control, you may reveal an enchantment from your hand, if you do, put a +1/+1 counter on target creature.

I'd like to see another weird equipment. Here, bowls are being equipped, so something in that vein of unconventional equipment.