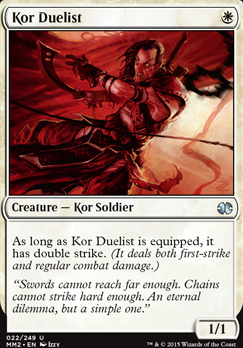 As long as Kor Duelist is equipped, it has double strike. (It deals both first-strike and regular combat damage.)

Kor Duelist occurrence in decks from the last year 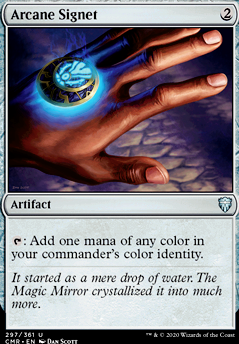 On the opponents battlefield there is a Plague Engineer on soldier, and for me a Colossus Hammer .

In my hand I have Kor Duelist and Magnetic Theft .

On the opponents battlefield there is a Plague Engineer on soldier, and for me a Colossus Hammer .

In my hand I have Kor Duelist and Magnetic Theft .

This will give you a better chance at having a more explosive start.

Not my deck style, but it also kinda is...

I would take out Elspeth, Knight-Errant and Scourge of the Nobilis for card draw engines Akiri, Fearless Voyager and Wyleth, Soul of Steel . The card draw will make a huge difference

StardustDragon11 on Looking for a fun budget â¦

Quest For the Holy Relic

Have you tried Kor Duelist or Anafenza, Kin-Tree Spirit?