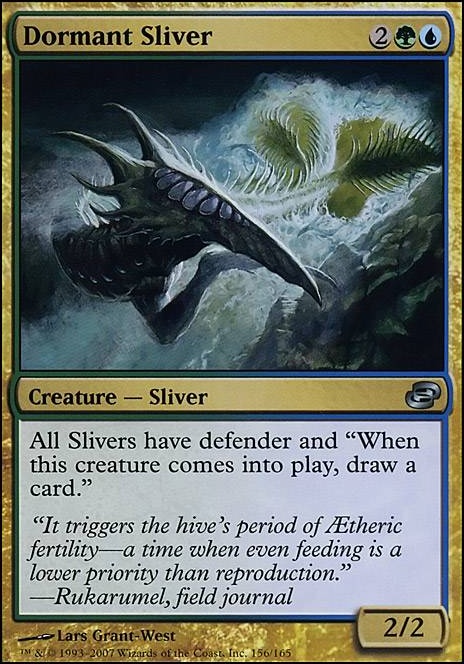 All Sliver creatures have defender.

All Slivers have "When this permanent enters the battlefield, draw a card."

Dormant Sliver occurrence in decks from the last year 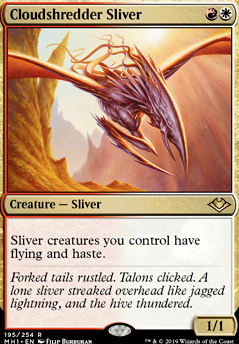 zombie66613 on crystalline sliver and vitalize

awesome you have no idea how happy you just made me thank you. lost a match well 1 cause of inexperience, and 2 because I didn't know if I could use Vitalize so didnt add it to my deck. on turn 5 I was able to almost dump my entire hive in one shot. because I had 2 Dormant Sliver I couldn't attack when needed to and still have enough slivers to do so, and had to pass turn.

Well the big bad Wolf, Well he huffed, and he puffed, all that he could. And low and behold the little piggy's house stood. "It's made out of concrete!" The little piggy shouted. The wolf just frowned, as he pouted. So they called nine-eleven, like any piggy would. They sent out Rambo, just as fast, as they could. "Yo, wolf-face, I'm your worst nightmare, your ass is mine!" Well the wolf fell dead as you can plainly see. and That will end the story, for you and me.

thank you very much for the help

The biggest fix you can make to this deck is with the lands. You have too many lands that enter tapped (tri lands, vivid lands, etc.) or set your mana back a turn (lairs). Consider adding more rainbow lands (lands that produce all colours), such as Mana Confluence .

I am a fairly big fan of Dormant Sliver , since it can help you dig fairly deep for more slivers, and is easy enough to kill with one of your own removal spells or something like Necrotic Sliver .

Ghostflame Sliver does not really seem to do much for you, other than be something the three-mana slivers can cascade into.

Couple of suggestions; I'd add Cryptolith Rite for an added Gemhide Sliver like ability. (take out Farseek ) I'd add Basal Sliver for mana ramp as well. I'd maybe take out Vanquisher's Banner and/or Phyrexian Arena for Dormant Sliver or Kindred Discovery for infinite draw combos with Sliver Queen . Leyline of Abundance is also good for ramp and to beef up your slivers.

Thanks for the comments! I will probably add Eladamri's Call . My expensive lands are in the deck just because I have them in my collection. If I already have the card is there any reason I shouldn't run it?

As for as making all creatures slivers I have Xenograft and Hivestone . Also won't ramp effects allow me to cast Dormant Sliver earlier than I normally would be able to?

If your ideal win condition is to get Dormant Sliver , you'll need more than just Worldly Tutor to be able to fetch it from your library. You could use Eladamri's Call and Sylvan Tutor But I think Dormant Sliver Is unnecessary, and by the time you are able to get it out, you will already have a huge sliver board state. Arcades and slivers just don't seem to work together.

Additionally, many of your lands are expensive and completely unnecessary, like Tropical Island , where you pay a $315 premium just so you don't need to wait a turn to tap that mana. Just use Thornwood Falls .

Also, Xenograft is a great way of making all of your creatures slivers, but it still needs more fetch cards like Enlightened Tutor , and Idyllic Tutor .