You Used to Call Me on My Talrand
by SorinDankov 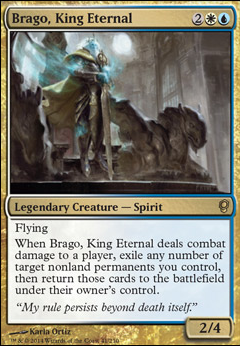 So, here we have a Brago, King Eternal blink/control deck. Our premise is simple: drop lots of ETB cards and protect them so Brago can come out and blink em'. There's lots of combos flying around and abilities to abuse from all the different ETB and LTB effects. 1v1 or Multiplayer, this deck always finds ways to win.

Clever Impersonator: always becomes whatever you want it to

Lavinia of the Tenth: mana rocks and dorks...BEWARE

Treachery: steal a creature and untap 5

Act of Authority: this with Brago is absolutely broken

Angel of Serenity: can be used to send 3 trouble creatures back to thier owner's hand or grab 3 creatures from your graveyard back

Archaeomancer: grab that spell back

Drowner of Hope: 2 tokens that sac for mana or to tap down a creature

Nevermaker: I'd like that on top of your library, please

Sun Titan: 1-2 permanents from your graveyard each turn

Thought-Knot Seer: you're my enemy, and he's my friend

Mana Drain: the most amazing/expensive counterspell, ever

Muddle the Mixture: would rather Transmute it to grab Strionic Resonator

Telepathy: just seeing if you have a response

Azor, the Lawbringer: no more board wipes with an attack activated Sphinx's Revelation

IF you have Strionic Resonator out:

You can do some serious stack bs using cards with ETB and LTB abilities that trigger separately such as the O-Ring clones (2 paragraphs mean two triggers. Cards like Banishing Light wont work.). Here's how it goes with Oblivion Ring on the battlefield:

NOTE: Cards like Fiend Hunter, Leonin Relic-Warder, Angel of Serenity, Journey to Nowhere, and Detention Sphere also work with this and permanently exile their targets.

Another fun trick with this is using Parallax Tide and Parallax Wave to permanently exile their targets. Here's the stack for that:

But screw it, please feel free to leave a suggestion. Hell, tell me why I'm wrong. +1 if you like! (:

Thanks guys for all the suggestions! It's been awhile since I've played. Anyone out there wanna pitch some stuff from the newer block? :O

Brago - What is dead may never die!