When Gilded Drake enters the battlefield, exchange control of Gilded Drake and up to one target creature an opponent controls. If you don't make an exchange, sacrifice Gilded Drake. This ability can't be countered except by spells and abilities. (This effect lasts indefinitely.) 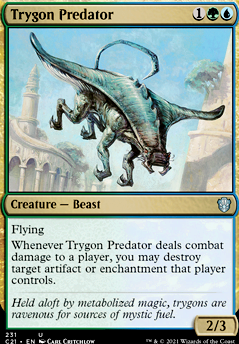 So if you want Zirda, the Dawnwaker as your companion (in the sideboard and always accessible to put in your hand for ), then every card you start with has to have an activated ability. If you just put him in the 99, then you don't have to worry about that requirement.

If you don't have Gilded Drake, I would take it out. There are lots of other ways to take opponents' creatures. While it has awesome value, I don't think it makes a $400 difference in your deck. I'd drop Lili temporarily and maybe put her in the maybe board for later when you can get her in. I'd look at adding more ramp. I really like Jegantha, the Wellspring with Kenrith. Something like Chromatic Lantern is a huge benefit in a 5 color deck. A budget option is Pulse of Llanowar, but not sure that will jive well with your manabase. Something like Kruphix, God of Horizons would help you carry over mana. Mirari's Wake and Zendikar Resurgent are one-sided mana doublers, like Vorinclex, Voice of Hunger. Good luck!

Hah! You a Souls boy too? It's the best! Yeah cEDH is fun I'm sure, but I def do not have OG dual lands, The Tabernacle at Pendrell Vale , Gilded Drake , or Wheel of Fortune type of money LOL. But yes, big dumb beaters with protection is ridiculously fun. Oh my Slurrk etb'd with +92/+92 counters on it? Sorry...

Daedalus19876 Hey there! I LOVE your primer; it's well-written and it has inspired me to look at running Araumi as my next commander choice!

Quick preface before going into some questions; I'm a pretty new Commander player (coming from Modern and Pioneer background) and I've been looking at a few decks to make a small "commander stable" over time.

Using this deck as a template (and also your Fresh Fish for Cheap ($250 Budget Araumi) as another reference), I wanted to ask you a few questions about how to tweak/modify this deck in case I wanted to modify for certain rules.

1) No infinite combo(s) rule: Let's say I'm playing in a more casual pod where this rule is instituted. What would you immediately sub out from this decklist and what would be good options to put in that would allow you to play a more relatively "fair (even if it's still graveyard shenanigans!)" game? Bonus points if the sub-in options are sub $20 at max!

2) Tailored budget considerations: For that matter, what would be some good options to sub out the >$20 cards in this list? The most obvious ones that I can tell, from quick pricing, are:

3) General theme of "powering down/creating more flair": I'm a huge fan of the 75% deck mentality, and I'd love to be able to modulate the deck to power up or down (mostly down based on this current decklist). Taking out the pricier cards is probably one of the most obvious ways to "power down" the deck, but what would you recommend in terms of other card substitutes (i.e. if I wanted to be able to side out/in certain cards just to add more flavor)? This whole theme is generally tied into the previous two questions, but this is just more picking your brain at this point!

Thanks so much for your work!

Being a huge Zedruu fan myself I gave your deck a look.

You are aware that Iona, Shield of Emeria is banned in EDH?

A few interesting suggestions to consider:

See my verion for more interesting options and possible ideas.

SynergyBuild on What are your Favorite Commanders?

Finding tricks with Aminatou is always a favorite of mine. Gilded Drake , Wishclaw Talisman , etc. let you do busted things each turn for super cheap mana costs. Finding more and more every day is a pastime of mine!

Gilded Drake is great. It's a fun and tricky little card. It's also, at the moment, a $300 card. Let's save our money and make space for highly tutorable, highly flexible mass artifact/enchantment removal instead.

Venser loses a bit of value without the ability to flicker Gilded Drake, so Narset comes in to limit enemy card draw instead.

Probably a fun idea to run Gilded Drake as well