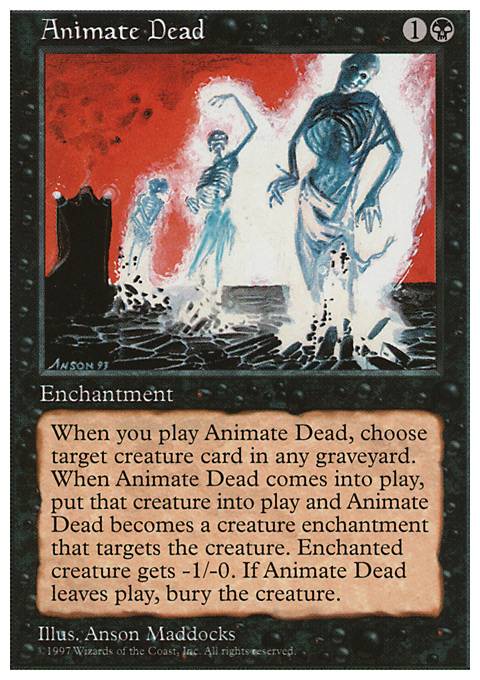 No Mana? How Sad
by tobiusmaxilla

sean360 Thanks for the helpful update! I definitely found it running out of gas earlier as well, which is why I added five more sources of card draw in the recent update, and swapped out some subpar ones I had for better ones. I'll definitely update how I see it working. I'm also considering an incredibly controversial card in the form of Armageddon. Some might be opposed to this, but I feel like with the imbalance green and blue have in terms of ramp and raw, white should be able to use the tools we have to keep up and eliminate unfair advantages. I think we can more quickly rebuild with our curve, and there is of course the nasty combo with Cosmic Intervention to consider. I'm a little conflicted about dipping into the dark side of the social contract, but it still seems fair to me. Nonetheless, I am undecided.

StopShot on Cards that encourage other players â¦

Run cards like Armageddon and tell the table every turn you'll wipe everyone's lands unless you're attacked. If they don't make good on those demands you play it which will definitely get them attacking you for sure.

Even if Avacyn isn't out, Cosmic Intervention works great with Mass Land Destruction. Just play it and the play Armageddon,or play it in response to Armageddon. People may scoop and you might lose some friends, but if you stick with Avacyn it's the most powerful way to go. Otherwise, switch to Giada with Avacyn as the in-deck commander. It all depends on what you want to do!

aholder7 on I want them to hate â¦

how much do you want them to actually hate you? like do you want to be able to play the deck again? because in terms of hate, i am seeing zero copies of Armageddon.

also as a note you seem to have a number of etbs along side your Hushbringer effects. might want to be careful with those.

If you want a fun interaction with Oketra you can always include Whitemane Lion and have it return itself. you now have a repeatable "1W: create 4/4 with vigilance". With Oketra's Monument or Pearl Medallion it gets even more efficient.

Armageddon and Boom / Bust fits the theme. I'm surprised either one did not make it to the list.

Epicurus on When did you start playing, â¦

My first deck was a blue/white weenie deck, with Flying Men, Savannah Lions and Counterspells. I quickly started running mono-white weenie, which is why to this day I get offended when people badmouth white. That first white weenie is actually still together 30 years later, it just gets updated every few years or so. And it still wins more often than not. Armageddon + Howling Mine + a crap load of creatures that only cost one mana = a lot more powerful than people want to give it credit for. More than half of the cards in that deck were pulled from packs of Revised (3rd Edition) that I bought back then; including the cards I listed above, as well as Swords to Plowshares.

I'm with Fuzzy003 on the power creep thing. However, just like I said in a previous comment about another topic, it's really always been that way. Back in the day, if you weren't playing black/blue draw/control or Suicide black, you weren't going to win any tournaments. The only real combo was Channel + Fireball , but a good lockdown control deck was nearly impossible to beat (besides the fact that Channel was one of the first non-ante cards ever banned, because it was too easy to win with it).

I did once own a turn 2 Guilty Conscience + Stuffy Doll deck. It won every game I played. As such, it was pretty boring. I never competed with it, because it was Vintage legal, and I didn't have Power 9 cards with which to make it a turn 1 deck. So I ended up selling it (which I've regretted ever since, because this was before Commander drove up the prices of the four Plateau in there from $75/each to well over $300/each, and the Wheel of Fortune in there that I had pulled from a pack jumped from $40 at the time to I-don't-wanna-know how much it is now).

The best I ever did at a competition was getting 3rd place out of 50 people back in ('95/'96?) with a budget Goblin tribal deck, that ran such beauties as Goblin Balloon Brigade and Keldon Warlord, hahaha. Of course, my Wheel of Fortune and Sol Ring were in that deck, as well as the Howling Mines, but remember, that's when WoF listed at a whopping $10. I believe that I even had a couple Juggernaut in there. And I beat some very competitive decks with all that jank. It was awesome.

I decided to post this story partly because the last couple of y'all made me nostalgic for the old days. Also, though, to say that:

I don't mean to be a downer or an old fogey, I just appreciate a bit more creativity than that. Always have. And since there's a finite number of ways to go infinite in any given color combination, and a finite number of wincons that flow from those infinite combos, decks that do so all look the same to me. Just a bunch of fetch, removal and draw surrounding a combo. 50% of the deck is setting up and executing the combo, and the other 50% is protection/denial/removal. So what percentage is leftover for theme?

Anyway, that's this old man's grumpy gripe about the state of the game these days. The old budget Goblin deck wouldn't stand a chance anymore. Although, I would put my White Weenie against any 60-card casual deck you'd want to try to throw at it ;)

But I don't want that rant about Commander or infinite combos to be the final takeaway from my post here. Fact is, I've ultimately enjoyed the journey. The ups and downs are as much a part of that journey as they are with anything else in life. Here I am, still playing a game that I learned before I had pubes. And still enjoying it. And I taught my kids to play it, and they love it too (though, maybe I should have gotten them into drugs instead, because it would probably be a cheaper hobby, hahaha). And I've been around the block long enough to know that nothing lasts forever, so I hope to keep on enjoying it until kids don't like it anymore and it ends up fading away.

Like I said in a previous comment, I was really excited about Neon Dynasty. I haven't seen anything from New Capenna yet that has me as excited, but time will tell. And The Brothers' War has me stoked. In other words, to hell with my complaints about the state of the game these days. Let's throw some damn cards! Turn 'em sideways! Play on!