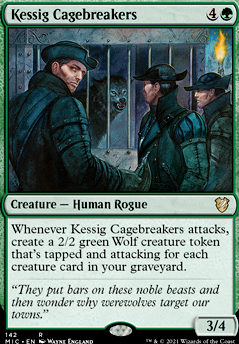 Whenever this attacks, create a 2/2 green Wolf token tapped and attacking for each creature card in your graveyard. 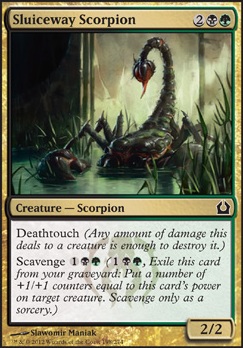 I'm thinking you should add a bunch of wolf tokens to get more wolves. Also Draw more ramp less.

I ran Jarad for quite a while in my Necrotic Ooze deck. The main plan is to fill the yard with a ton of creatures off cards like Satyr Wayfinder , sacrifice them with Hell's Caretaker to bring back huge threats, and/or use Ooze plus strong activated abilities like Avatar of Woe 's and the untap from Devoted Druid to amass an advantage. Before going in a more combo-heavy direction, I had Jarad and Korozda Guildmage as my big payoff cards (with Spider Spawning and Kessig Cagebreakers in the sideboard). Both love the way the Lord himself can be sacrificed to close out the game when your graveyard gets big enough. Having redundant effects helps make any plan more resilient, so I usually run a playset of Splinterfright and sometimes consider Nighthowler or Bonehoard as backups for the elf. Splinterfright in particular benefits from having a Nyx Weaver self-mill effect tacked on. The major benefit to using these types of cards over Colossification is just mana cost. +20/+20 will almost always win the game, but for 7 mana, it's easy to see it being too slow in all but the most casual environments. Plus, if you tap out for the aura, a single Vapor Snag can ruin the plan before Jarad gets to activate. I'd want some other ways to take advantage of the huge buff, even if that's just efficient trample creatures, if I was building around Colossification. That, or finding some way to cheat it into play early.

If you can, I'd also recommend cutting down to the 60 card minimum. This will make it all the more likely you draw the most synergetic cards, although I do like that you have tutors to help with that too.

Now that I added Bloodspore Thrinax I want to put Kessig Cagebreakers in this deck to maximize the synergies (wipe my non-token creatures board, have a lot of tokens on Bloodspore Thrinax and a cemetery full, for Kessig Cagebreaker, it Works the other way around too, but slightly slower, but it can be repeated with basic reanimation for more chaos)

hi TheBooman i would definately suggest my older non-combo build.
Basically a self-mill deck packed lots of creatures like Boneyard Wurm,Jarad, Golgari Lich Lord,Splinterfright,Kessig Cagebreakers,Izoni, Thousand-Eyed,Hallowed Spiritkeeper and of course Brawn.
Other than that i don't have a good idea because i am actaully trying to improve the combo and those cards although really good they are a little slow for my playgroup.