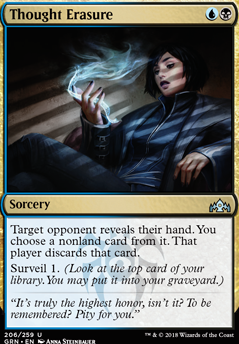 Target opponent reveals their hand. You choose a nonland card from it. That player discards that card.

Surveil 1. (Look at the top card of your library. You may put it into your graveyard.)

Draw another card, I Dare you
by coolestardude

Nicol Bolas, the Ravager
by SweetDreamsies

In place of the Thought Erasure, iâd recommend the following:

Very nice deck, I like! My only suggestion would be to swap out Thought Erasure for more control magic, or more killspells. Control decks either want to be proactive (with hand disruption), or reactive (with counter magic), but seldom both, because itâs hard to be proactive and still have mana left up for reactions. I can imagine Thought Erasure getting stuck in your hand a lot of the time, or worse, if consuming your mana and allowing your opponent to do what they want.

The entire point of having damage and mill win conditions is so that I have a few ways of winning. I have 3 win conditions so far: one with damage, and 3 with milling: milling myself Traumatize and Fraying Sanity targeting myself with Jace, milling the opponent with those two cards, and using Phenax, God of Deception if I have a lot of creatures on the field . I want to keep my deck varied, as when I can't win with damage, I can win with mill. Also, legendary doesn't matter; I have multiple copies of the same legendary card because it gives me the draw advantage and if they die i'll be able to replace them. Legendary doesn't mean you can't have more than one of each legendary creature; just not more than one of the same legendary creature. This deck works perfectly as a damage deck already. The milling is just another addendum which also functions off of high toughness as an advantage. If I had Bant colors, I wouldn't be able to use Diabolic Tutor , Phenax, God of Deception , and Thought Erasure . Phenax is what i'm using to mill as a win condition. I would like to use more mana so that I can balance my mana usage, but it's fine for now.

Ooh, just saw Thought Erasure. That's a no-no. Never, ever use single player hand disruption in EDH. It's disadvantage for you and an advantage for other players. Replace this card with a land.