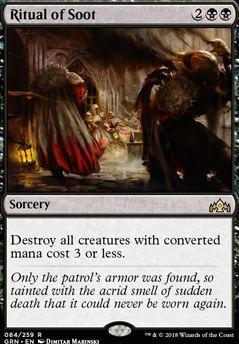 Destroy all creatures with converted mana cost 3 or less.

Demonic war of Attrition
by Abused_Haggis

I like this deck, but you might want a different board wipe than Ritual of Soot which kills your Commander too. Consider something like Slaughter the Strong, Fell the Mighty, or Austere Command.

Mtg_Mega_Nerds on Languish Vs. Ritual of Soot

Hello all. I want to add Liliana, Waker of the Dead to my Grixis Superfriends deck. I have 6 boardwipes, and I think that is too much. I want to take out one to have 5 boardwipes and be able to include liliana. What should I take out, Languish and Ritual of Soot ?

Best shell IMO is a grind engine in a pox/rack shell. Run cards like Wrench Mind and Smallpox to crush their hand and resources, and then resolve The Rack and Shrieking Affliction to pressure their life total. Then all you need is the occasional Ritual of Soot and you're pressuring all 3 angles at once.

Unless it fits into your combo, I wouldn't go for Scepter; way too slow for the modern meta, in general. But yes, the 2-cmc counter slot is VERY important. If you're going for the 1-cmc hand removal, it's generally advisable to run 6 of them, intending to have one you can cast t1; however, some people go as low as 4, if they're also running counters. If I'm running them at all, I like the full 6, but you do you. Between the two, I'd generally go Languish or Ritual of Soot , but it really depends on the meta. For SB, Plague Engineer is a house, too.

Nice! These are some good ideas and I actually own a lot of these cards (no Snaps though, oi vey). Hmm having been on the other side of targeted hand removal I know it can be really devastating. I also know things like Remand can be horrifying to play against when used with Isochron Scepter . I once got completely locked out by a guy running that combo in mono-blue and almost quit the game after. I hadn't thought about the black sweepers at all though! I have some copies of Damnation in some other decks and they are way too expensive now so maybe running some Languish or Ritual of Soot wouldn't be such a bad idea after all?

Hmmm given me a lot to think about!