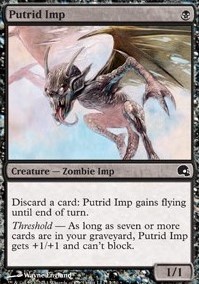 Threshold â As long as seven or more cards are in your graveyard, Putrid Imp gets +1/+1 and can't block.

This deck definitely needs Putrid Imp, both for the zombie count and also the free & infinite discard capability on Turn 1 to really pour things into your graveyard for a quick & powerful Diregraf Colossus cast Turn 3.

It'd be a beautiful fit here imo (He's one of my favorite older cards to abuse...haha)

If you just want a turn 1 large creature and are willing to forego red/green: Swamp , Dark Ritual , Entomb then either Reanimate , Animate Dead , Exhume .

Or Swamp , Dark Ritual , Putrid Imp (with a large creature already in your hand), one of the above reanimating spells.

Thereâs still some luck necessary (you need a Dark Ritual in your opening hand), but itâs lessened with two potential paths, a smaller number of cards needed than your Green/Red combo, and the fact one of your combo pieces has three possible options.