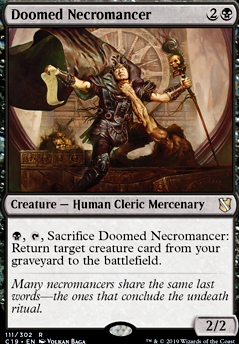 , , Sacrifice Doomed Necromancer: Return target creature card from your graveyard to the battlefield.

Doomed Necromancer occurrence in decks from the last year

She who Smiles at Death
by DrunkManSquakin666

Why won't they stay dead?!

Wow! Thanks multimedia for the really well put together advice! Yeah the land base will be getting an overhaul at some point in the near future, right now it's just cobbled together from what I wasn't using in other decks so I'll be getting my Bloodstained Mire and Blood Crypt as well as a number of the other lands you mentioned when I can. I love all the suggestions though! Necrotic Ooze and Kiki-Jiki, Mirror Breaker do work great with the rest of the deck so I'll have to think about them but I already have 3 decks that can win by going infinite so I'm not sure I want to turn this into one too. At a certain point I may as well just add Impact Tremors and win if I am going to run combo pieces but I'll think about it as they both work great with Apprentice Necromancer, Doomed Necromancer, Magus of the Wheel, etc. so it's super tempting just in terms of synergy.

Anyway thanks for all the suggestions and for taking the time to go over the list! Great tips, definitely gave me some new ideas!

Hey, I didn't suggest to cut the Apostles, keep the Apostles. they're good and the best parts of your deck :)

as General because he gives you more interaction with Apostles as well as reanimation which is good backup plan with Demons. Casting Apostles for one mana from your graveyard and giving the Demon you cheat into play with Apostles haste are interactions that make Apostles better. With Chainer you can abuse creatures for reanimation of Demons such as Doomed Necromancer and Apprentice Necromancer. After discarding one of these Necromancers or a Demon, Chainer lets you cast one of these Necromancers from your graveyard and then because of haste you can use them right away to reanimate the Demon you just discarded and that Demon can attack with haste.

Rakdos, the Showstopper as General doesn't have interaction with Apostles other than they can tutor for and put Demons onto the battlefield, but they can already do this meaning Rakdos is not adding anything to help with the Apostle strategy. Showstopper is better as a Demon in the 99, not General, therefore Apostles can tutor for it. Rakdos, Lord of Riots is better than Showstopper and Riots is good with Demons, but not good with Apostles. You will want to change your deck quite a lot if using Riots as Commander.

The flavor is neat with Rakdos as General, but overall this Rakdos is lackluster. Consider Chainer, Nightmare Adept

as Commander General? Chainer is being displayed as $8, but it's a glitch. It's not that much, in fact it's less than $2 at TCGPlayer.

If you like these suggestions I offer help to make cuts. I also offer more advice if you like. Good luck with your deck.

Right now, I dunno how to try & find what cuts to put in/what to replace; & a lot of good cards are currently in the Maybeboard. I do want this to be Reanimator based, Animate Dead + Worldgorger Dragon (Worldgorge Win.) Hell's Caretaker, Everyone Discard like mad Waste Not, Bone Miser, among other effects, & Sacrifice for effects more beneficial to you, than your foes; likely resulting to benefitting from your other cards in exchange for Sidisi, Undead Vizier, Razaketh, the Foulblooded, even Doomed Necromancer! Some are hybrids of 2/3 of these effects; Maybe all 3!

I don't want to discourage you by suggesting to add so many cards and cut so many cards. You have a really good plan for when you get Rakdos onto the battlefield, but the problem is you haven't included many ways to cast Rakdos. Because can only cast him if an opponent loss life for the turn. You have a great late game base of creatures, really good, but there's not very much, if any, early game plays to make. Commander decks want three plans at various stages of a game. One for the early game, one for the mid game and one for the late game. Right now you have planned out the mid and late game well, but have neglected the early game. My advice is sacrifice some mid and late game cards for early game cards.

Some examples of different plans for each stage of the a game.

As I said in my last comment I think you can cut quite a few of the big creatures and replace them with more early game cards that let you interact with Rakdos faster.

All these cards are by no means bad, they're just in my opinion worse than the other cards here. In my last comment I listed about 20 cards for you to consider adding most except Heartless Hidetsugu and Artisan of Kozilek were one to three CMC. Which included pingers (Spear Spewer, etc.), mana rocks (Rakdos Signet, etc.), reanimation/enablers (Doomed Necromancer,Buried Alive, etc.) and instant removal (Chaos Warp, etc.).

40 lands is a lot of lands, consider cutting some for additional mana sources (mana rocks)?

I think you're better off adding mana rocks then having lots of lands and equipment. I think it helps your deck more to have color fixing and ramp then equipment. Mana rocks are excellent early game plays. Equipment are mid to late game plays and they only do something if you have creatures on the battlefield who can attack. Rakdos or Sin Prodder could be good sources of a creature for equipment, but equipment overall is not doing much here. Because of mana cost for Rakdos then mana rocks that can make colored mana are more desirable then ones that can't. However if you have the powerful mana rocks that only make colorless mana (Sol Ring, etc.) still play them because they're some of the best cards in Commander.

Lots of basic lands can be problematic when the main casting cost you're trying to make is for Rakdos. Some other playable Rakdos dual lands to consider adding:

My advice is focus much more on the early game and much less on the late game. You don't need 25 high mana cost creatures for Rakdos, it's overkill.

Heartless Hidetsugu can reduce a ton of colorless mana with Rakdos with one activation. Use this reduction to free cast Eldrazi (Ulamog and Emrakul). Artisan of Kozilek can be reanimation and Void Winnower is also good. These Eldrazi are really the only high mana cost creatures you need because lets face it there's not a lot of other creatures that can even compare in power level.

Other high mana cost creatures of the ones here to consider keeping are: Ilharg, the Raze-Boar,Sidisi, Undead Vizier,Urabrask the Hidden,Etali, Primal Storm,Archfiend of Despair,Vilis, Broker of Blood,Sheoldred, Whispering One. This is a base to consider:

If you would like I can give you a list of cards to consider cutting. Good luck with your deck.