Each other Rogue creature you control enters the battlefield with an additional +1/+1 counter on it.

Whenever a creature you control with a +1/+1 counter on it deals combat damage to a player, that player discards a card. 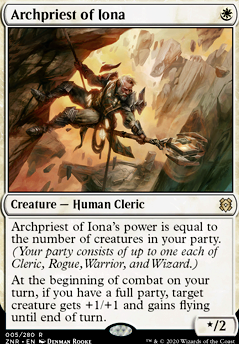 Love the deck, and I appreciate that it leans toward aggro rather than mill. I have a similar Anowan deck, but mine focuses on stealing creatures from graveyards.

Just to name a few.

zapyourtumor After playtesting, I've realized Oona's Blackguard is our slowest creature, but is alright if the deck is stock full of one drop rogues. I feel if we are playing Oona's Blackguard we benefit more from one drop creatures than from Vicious Rumors. I don't know if it's the way to go for this deck, but being so dependent on one drops for value, playing 2 or maybe 3 Drown in the Loch felt right for the mainboard. That being said I'm going to keep testing to make sure.

zapyourtumor I think you're right here. I was leaning into creatures to help our rogue payoffs which are dependent upon them, but I believe I may have leaned in too heavily. I am, however, somewhat apprehensive to put 4 into the main, at least in exchange for only our one drop creatures. In your opinion, would it be better to go down one or two Oona's Blackguard or Vicious Rumors?

Allies is far from solved. Most competitive lists I've seen have tended towards 3-5 colour aggro, but it is an open field. Go wide with +1+1 counters will do good.

You can pretty much run Champion of the Parish as 'extra allies' since allies are humans in most lists.

Harabaz Druid opens up infinite mana with an untap effect. Turntimber Ranger goes infinite with 'all creature type' granting effects. Both jank out wins but I've never seen it be really great.

Kabira Evangel is amazing for pushing through damage with 'pseudo unblockable' and offers protection in vial lists. You might want the 'blank' 1 mana allies (equipment guy, the 2/1 and the other one I forget) to even out a curve.

+1+1 synergy is probably the best bet - I've tried to get three colour with Oona's Blackguard working as a grindy list, but it was a little too clunky, but might still be worth a sideboard slot in some matchups.

I remember I tried to make a $50 budget jund midrange deck with a +1/+1 energy counter subtheme using Bloodhall Ooze , Glint-Sleeve Siphoner , Oona's Blackguard , Scavenging Ooze , and Winding Constrictor . When you decide to make a sideboard, I think Scooze would fit in nicely there. It actually worked decently well, but the part that really screwed me over was the lands :(