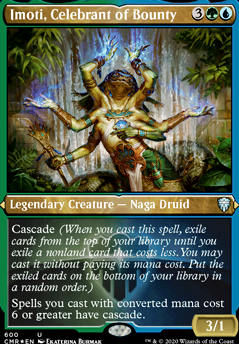 (This is a Mid Tier Optimized Multiplayer EDH. We usually don't play fast cEDH combos or very expensive cards in our playgroup)

Obssesed with everyone searching for a mana curve below of the average 3 - 2 mana cost? You want to unleash your love for unplayable costly cards? If so... this is your deck.

(LORE) IS IMOTI, CELEBRANT OF BOUNTY, FROM AMONKHET?

Imoti, Celebrant of Bounty is an awesome legend. We don't know much about her, aside her lore from WofC article, The Legendary Characters of Commander Legends, Part 2: "The Naga tribe of Imoti depended on only one river to survive. A distant battle between unrelated factions contaminated the waters of this river with dark magic. Imoti is the only member of her tribe who possesses the blessing of the nature deity that allows her to purify the river waters. Imoti spends hours every day casting a purifying spells under the waterfall that feeds the river. She rejected to be the leader of her tribe because she believed other members were more qualified, and she only desires to craft an spell capable to purify all the river forever."

So, where is Imoti from? In her art we can see some clues: an ancient egyptian outfit, an egyptian lotus scepter, some papyrus stems, a waterfall that can be a reference to the upper Nile waterfalls... Is Imoti from Amonkhet?

Officially this procedence is not confirmed, but I think so. In her story we can learn that the river of her tribe was contaminated due to the dark magic coming from a war. This could be a reference to the events of Hour of Devastation where the black magic of the demon Razakhet and the dragon planeswalker Nicol Bolas turned the water of the river Luxa into a toxic blood, poisoning it. Imoti's name could be inspired on Imotep (a famous ancient egyptian sage and arquitect) and Hapi (the god of the Nile river). The title of Imoti also sugests her relation to the plane of Amonkhet: "Celebrant of the Bounty" could be a reference to a card from Amonkhet, Bounty of the Luxa, a simic enchantment that is also related with the fertility of the river.

Other people associated Imoti with other planes, specially due to having 6 arms, an strange feature not common in Amonkhet nagas. The orochi, the snake folks of Kamigawa have 4 arms, but Imoti is a naga, an snake like creature with human upper body and a snake lower body, not a snake folk from Kamigawa, with always have four arms and two legs. Imoti could be an special naga due to his nature deity blessing, in the same way Kydele, Chosen of Kruphix is an human from Theros who thanks to the influence of the god Kruphix has developed two additional arms. We also know that Amonkhet is a polytheist plane wich could have more gods than the eight we already know, and this "nature deity" could be an unkwnon fertility god of the Luxa river who is worshiped far away from the city of Naktamun, the only place of Amonkhet we have visited at the moment in Amonkhet and Hour of Devastation.

The real mystery is why Wizards of the Coast has decided to hide the plane of origin of Imoti. Maybe is because they wanted not to reveal future clues about a return to Amonkhet, or maybe is because Imoti is from a new unknown plane with a Middle-Eastern setting... maybe a Persian, Mesopotamic or Arabic plane? (Kaladesh is already the Indian plane, and Tarkir's sultai already cover the Khmer empire, but Imoti doesn't appear to be from that planes, as in Kaladesh there aren't nagas and in Tarkir nagas have more humanoid faces)


Imoti, Celebrant of Bounty is one of the highest CMC decks you'll see in a playable enviroment. Don't get fooled by Imoti being an uncommon card, or by the hideous mana curve of the decklist, the deck works very well, and will be a fearsome rival for your non-cEDH playgroup. This is possible thanks to two main things: First, we'll have a very large ramp engine, and second, Imoti's cascade effect that will help us search all those mana ramp spells while we keep playing our big creatures and spells.

The ramp engine is very imporant as the average CMC in the deck is around 5! I've included a bigger amount than normal of ramp spells and mana rocks: Simic Signet, Sol Ring, Arcane Signet, Sakura-Tribe Elder, Nature's Lore, Lotus Cobra, Coiling Oracle, Rampant Growth, Farseek, Cultivate, Kodama's Reach, Farhaven Elf, Gilanra, Caller of Wirewood, Growth Spiral, Migration Path, Selvala, Heart of the Wilds, Avatar of Growth, Bounty of the Luxa and The Great Henge. As you can see, it's a very varied mana engine with different levels of CMC, and also some cards like Selvala or Gilanra that sinergyze with big spells or creatures. Some of our big spells also will help to generate more mana, like Nyxbloom Ancient, Avatar of Growth, and Regal Behemoth.

Synergyze around the Big Mana Costs.

As we are going to include many mana expensive cards to abuse of Imoti, Celebrant of Bounty cascade, is a good idea to inclue some cards that care about mana hungry cards too: Fierce Empath, Selvala, Heart of the Wilds, Thunderous Snapper, Thryx, the Sudden Storm, Gilanra, Caller of Wirewood and Brinelin, the Moon Kraken. These cards will make more valuable to pay a painful big CMC.

Once we have enough mana, and most important we have some synergie with high CMC spells thanks to Imoti, Celebrant of Bounty being in play, or some of the last mencioned cards, we can start to hit the board with our bigest spells.

A good idea is we can use some cards that have a very high converted mana cost, but in practice can cost us less to cast: cards with delve (like Dig Through Time or Treasure Cruise) or simply cards that reduce their mana cost in some situations (like Ghalta, Primal Hunger, Ancient Stone Idol, Avatar of Growth and The Great Henge). We can play this cards more cheap but giving us the cascade trigger of their original giant CMC.

Transforming our ramp into a weapon.

Ramp spells are the most frequent card in the deck. This will help very much in the first turns, but then it could be unwished... unless we build around it to keeping taking advantage of it. As you can see, this concrete deck has also a land subtheme (Cards like Tatyova, Benthic Druid, Rampaging Baloths, Roil Elemental, Ashaya, Soul of the Wild, Ancient Greenwarden or Retreat to Coralhelm. I've played other land matters decks in the past and I love them, but I've never played one on Simic colors, so, this was a good chance to achieve this. I also love Kefnet the Mindful and his capacity to return lands to our hand, to repeat landfall effects and ETB effects, combined with cards like Halimar Depths, Ashaya, Soul of the Wild and the Zendikar Rising modal land-spell cards (like Bala Ged Recovery Â  or Sea Gate Restoration Â ) can be very fun.

How to control with an uncontrolled Cascade Engine

I want to mention the small amount of counterspells this deck has. They don't synergize well with cascade, as we can find them in our library losing that free spell opportunity. To counter that, I at least play some modal counters like You Find the Villains' Lair, Mystic Confluence and Sublime Epiphany (At the moment I don't own Cryptic Command, but I should get one), that I can use to counter spells if I play them from my hand, or doing other nice effects if I cast them with cascade.

CARDS I LACK
Some cards that appear in my Maybeboard, like Misty Rainforest or Cryptic Command are perfect for this deck, but I don't own them at the moment or the only ones I have are already in other decks. I'll try to include them in the future as I get them.

POSSIBLE COMBOS
Simica has access to thousands of combos (Earthcraft combos / Peregrine Drake or Palinchron combos, Food Chain combos , Sakura-Tribe Scout ones...) At the moment I don't play any of them in this deck, but I'm planning to include some of the combos I'm going to name next, just because I think they fit with my landfall subtheme and I already play some of the cards in my current deck:

2- Ashaya, Soul of the Wild + Ley Weaver to generate infinite mana. (And with the searched Lore Weaver thanks to Ley Weaver "partner with", infinite card draw to end the game).

I think to add a bit of combo as an alternate wincon will help a lot this deck, without pumping it too much.

CONCLUSION
I want to improve this article in the future, so I'll love to read your suggestions and ideas. Thanks!

By the way, if you liked this article, here you have other Tappedout deck of my own:
KEPRHI, THE SCARAB GOD, ETB Toolbox Reanimator