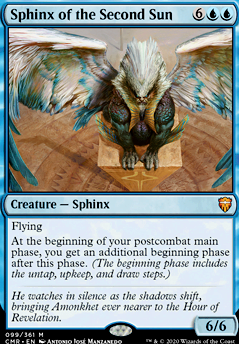 Sphinx of the Second Sun

Who wants to Windfall?
by Morrowind135

Sphinx of the Second Sun Discussion

Also noticed that if add Followed Footsteps back in alongside adding Aggravated Assault to the list, you can get infinite phases with Sphinx of the Second Sun. Along with infinite sphinxes. I just wanted to move all our curses but this happened lol.

You could manage this with a second upkeep, using either Paradox Haze or Sphinx of the Second Sun. Or in silver boarder magic use Topsy Turvy to take you upkeep late in the turn.

I like that Paradox Haze. My Esika deck is currently using Sphinx of the Second Sun for the extra upkeep step. May have to add the Haze also.

DoomNoodle, thanks for checking my list out. Yeah I considered Sphinx of the Second Sun , at first I stayed away because I was trying to keep a low curve and I also play in a boardwipe heavy group. Now I just haven't tried to figure out what I could remove for it. For now I will put it in my maybe list since I do want to try it out eventually.

I love this and been brewing around this guy for a while now and is the dimir commander Ive been waiting for. have you considered Sphinx of the Second Sun for that extra upkeep at post combat main phase?

I find that Sphinx of the Second Sun has a lot of synergy with Biovisionary since it gives you more mana, and more cards in a single turn that can help you combo. Also you can win in your 2nd begining phase.