At the beginning of combat on your turn, creatures you control get +3/+3 and gain trample until end of turn.

: Until end of turn, target land you control becomes a 1/1 Elemental creature with vigilance, indestructible, and haste. It's still a land. 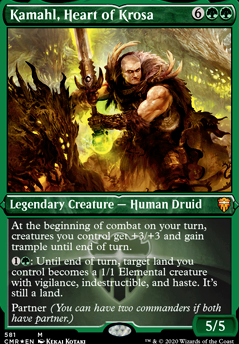 I don't know how competitive you're going, but I've seen some sick Kodama of the East Tree / Kamahl, Heart of Krosa + Tormod, the Desecrator land decks out there as well.

Part of it is based on how competitive you're going, of course budget, and even playstyle. Gitrog will often be a bit more combo-based, where I'd peg the partners (especially with Kamahl) as more aggressive.

Landfall/lands matter is a HUGE archetype and has cards in most sets out there to the point where for my lands deck, I have trouble deciding what I can take out for new cards since it's so streamlined. You're going to be spoiled for choices with this strategy, and can build it a whole bunch of different ways.

Made a few changes to this one, hopefully helping it out a bit:

I added in Kamahl, Heart of Krosa to help finish with tokens.

I have all of my decks on here private. Only have 2 or 3 I'm planning on buying. Sort of just a folder system for junked ideas. Like I just constructed an Akroma, Vision of Ixidor / Kamahl, Heart of Krosa deck that's called "Keyword Soup". Lol

Given that, I'll make the deck public. I'm trying to decide on replacing It That Betrays and Pathrazer of Ulamog but I'm not quite sure with what just yet. I like the idea of overrunning the board with Annihilator, especially if I can get control of everything haha. Call it a dirty little secret. Some salt with all that spice.

Cards to cut for budget:

After spending the day on edhrec I did find something interesting.

Iâm just not sure which one I like more than the other.

Akroma on one hand seems interesting for a keyword soup deck but Iâm not sure with what I should use as a partner and running such a high cmc commander without green to ramp up and double up my mana seems risky. On the other hand Kathril, Aspect Warper would be interesting at the helm of the deck. Distributing plenty of keywords around and then placing akroma on the field is pretty good in my opinion but the guy at the store told me that Kathril was a very weak deck and I wouldnât do much in a game.

As for Kamahl well in not sure what paring would work for him or even what to do with him. I thought either a bunch of 1-2cmc (human, elves maybe goblin) being pumped all at once with +3/+3 or a bunch of tokens being pumped was a funny idea.

seshiro_of_the_orochi thank you so much for your comment and ideas!

Meloku the Clouded Mirror is a nice idea, I can even use her with Ashaya, Soul of the Wild to recover my own creatures. I have Goreclaw, Terror of Qal Sisma in my collection, I was going to include her but I prefered to try other things, but I love that card too. Impervious Greatwurm would be easily removed in my meta, but in other situation could fit too. Kodama of the East Tree is awesome, but it "steals" me cascade triggers when it extracts cards from my hand, so I decided to keep it for other decks. Seer's Sundial is nice but I've played this deck and card advantage isn't a problem at all with cascade. The main problem I've noticed this deck has is only to add one or two powerful finishers, something like Craterhoof Behemoth or Kamahl, Heart of Krosa. Just because some games I make an inmense board but I lack a pump effect to really tear appart opponents.

Btw nice nickname!, Seshiro the Anointed was one of my favourite legends back when it appeared on Kamigawa, nowadays I run it in my Hapatra, Vizier of Poisons EDH deck (not in tappedout yet).

I'll look your Archelos and Brokkos decks, thanks. Love sultai but nowadays I don't have any "proper" sultai EDH deck (only a modest semi-Precon Ukkima-Kazur +1/+1 counters deck)