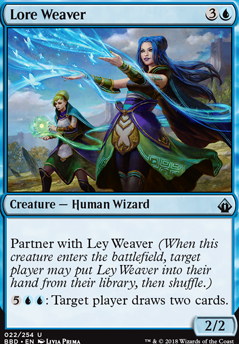 Partner with Ley Weaver (When this creature enters the battlefield, target player may put Ley Weaver into their hand from their library, then shuffle.) 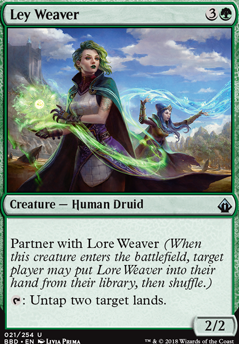 @sneekygoblin: Most games you'll find are going to be casual multiplayer. While there are "top tier" decks like Tatyova, Benthic Druid, Disciple of Deceit, Ley Weaver/Lore Weaver, Zada, etc. basically all of these decks come down to some variation of a Ghostly Flicker/Freed from the Real combo or something where the commander is a unique combo piece like Izzet Guildmage or Malcom, Keen-Eyed Navigator. That is to say, most of the cPDH decks are like cEDH where there are a lot of variations of similar concepts. Where the format diversifies and shines are the mid-to-high power decks, which have a ton of variation and commander choices. Because the decks are so cheap, it is possible to have multiples of both cPDH and PDH decks for the cost of an average EDH deck.

I agree the Partners will most likely affect the format, just as they did with EDH, but not in a bad way; I think it will actually help to diversify the top-end of PDH while the lower-power partners will find their place in casual games or not at all. As exciting as some of them are there are still similar or better options for a lot of combinations available at Uncommon.

I guess we'll have to agree to disagree on the Legendary rule, I think using any uncommon is a feature, not a bug.

griffstick- first off if you are not already, I would recommend joining the PDH discord (which is linked above). Second, I do not think that PDH has been "figured out" as EDH or other formats have been. This is due to the small number of players and data that is available. What I mean is that of the few that play this relatively niche format only some are competitive players and even fewer are part of the community trying to help figure PDH out. Third, Lore Weaver/Ley Weaver is really good. It can combo really quickly but as for being the best of the best-- I do not know. All of the tier 1 decks have their strengths and weaknesses and all will be able to do very well in games. As in all singleton formats, it is very hard to have a deck that is able to do (or at least try to do) what it wants to do just because you might not draw the cards you need and opponents might just have too much disruption.

As for my top 5? I do not have a list of my own but this one by Podkomorka is definitely a good place to start if you are looking to build a competitive deck. And that is not to say that there might be another commander out there not on the tier 1 list that just has not been brewed yet or brewed to be competitive. As I said, PDH has a very small amount of players so it takes a while for the best iteration of a deck to come along.

The best I can give you as far as my own top 5 is the qualities I look for in a commander when looking for a good/tier 1 commander:

Could you say that with this limited card pool. As magic stands right now. Is pEDH figured out. There's only a few ways to generate infinite mana. It's what you do with it that makes the deck. Does that mean that we could possibly say that from the top 6 tier 1 pEDH Cmdr's. That there is one that stands out above all as the number 1 Cmdr and exactly how it would be built. Is that Cmdr Lore Weaver Ley Weaver?

Podkomorka one more question and I'll leave ya a lone for the night are the partner commanders used together or are they a individual units; like can they both be in the command zone? Ley Weaver and Lore Weaver