( can be paid with any two mana or with . This card's converted mana cost is 6.)

Search your library for a card with converted mana cost less than or equal to the number of lands you control, reveal it, and put it into your hand. Then shuffle your library.

Braids, My personal helper
by Potvuurka 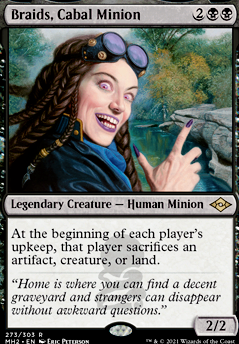 The Fat Man
by sitri_

The Scarab Gandhi
by Runeshadow

Anje's Descent into Madness
by Liie88 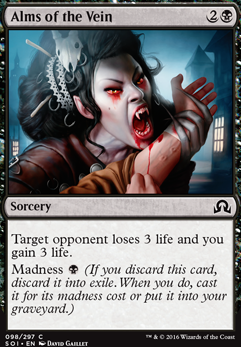 What sort of power level is this for? If you want it to be a bit more powerful, I would probably cut down on the number of bombs you play and instead running some tutors like Demonic Tutor, Beseech the Queen or even Grim Tutor. That way you can drop the demon/angel/dragon you need, rather than just the one you happen to have.

Hey, good to see another player building around -1/-1 counters!! Iâve got my own build here, which has gone done quite a different direction, but iâve tried to detail the archtypes problems and solutions there.

For your deck, i have the following suggestions:

Consider running this tutor package instead of what you are running now.

The Shreds go for any of your 2 cost combo piece (OR) can snipe cards out of people graveyards at instant speed. It's very important with Snap Caster being played heavily in modern. The queens go for anything. I tried the Infernals but they only go for the Myr (can go for different stuff but that isn't the plan). I think the Shreds are a better option. They seem to run better. Just my 2cents. Have fun!

It's fairly simple. A card with only phyrexian mana can be cast for no mana ( Gitaxian Probe ) while a card with only two-brid mana can't. ( Beseech the Queen )