All nonsnow creatures get -X/-X until end of turn, where X is the number of snow permanents you control.

When Hel freezes over (increased budget)
by Phion 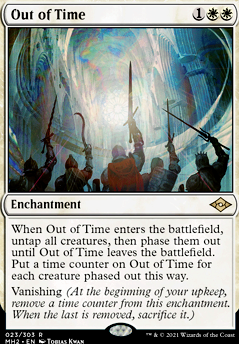 I would board more Dead of Winter and Glacial Revelation, they're OP on a snow pile. Perhaps a couple more Into the North for the snow taplands?

babydaggers, I haven't really found the lack of boardwipes to be an issue in the games I have played with the deck so far. In one of the last games I played, I had Torment of Hailfire in my opening hand and was in a position to dump about 10ish mana into the X (treasures and Crypt Ghast both on board), but I held off on using it so as not to win too early when everyone else was having a good time. Definitely one of those "I my next turn I totally would have..." type games. As much as I wish I had used it, it did set up a pretty cool turn interaction where myself and 2 of my other friends pooled our resources to take out our other friend who threatened 2 different combo wins with his Hapatra, Vizier of Poisons deck. In that game, my saving graces were Tibalt's Trickery and Chaos Warp.

I've been kicking around the idea of replacing Exsanguinate with Dead of Winter. I do have a copy of Toxic Deluge in another deck, but I think that deck needs it more, and Dead of Winter could be some decent tech in this one. I like Exsanguinate and have both died to it and also prolonged some of my own games with it. If it came down to it, I'd rather cut Exsanguinate over Torment of Hailfire.

My meta is varied enough that someone is always packing a boardwipe, so I thought I could either A) steal one via theft effects or B) let someone else carry the responsibility of making that decision. Since my playgroup is mostly just my friends from college, I've learned that sometimes its better politically to let someone else carry the burden of decisions that might not be as popular with the rest of the table lol.

Thank you Carpecanum. I like that I can board wipe myself Incase things get messy with Dead of Winter. No risk no reward. :)

I don't Wana give my friends creatures. Lol. So koronas is out of the question.

Dead of Winter is one of the few cards that will actually destroy all your Indestructible gods... Maybe something like Eerie Interlude to get them off board before its played?

Karona, False God might be funny. You should always have an indestructible blocker and when its your turn Karona gets to declare GOD as the chosen creature type.

On another note: I think the card should either be as it is, high CMC with repeated wipe and no drawbacks.

You could make it an active with the same drawbacks as Pestilence - you have to feed it to keep it around (creatures on the field) and it will also damage everyone (incl. players), so your life total can be a containing measure. You are unlikely to activate it if you're low on life, thus it has counter play options available to all colors. Since it applies -1/-1 counters I would say that just is not enough for the activation and it would have to be at minimum.

It could be considered to use -1/-1 until end of turn instead - ala Dead of Winter . It bypasses indestructibility, protections, and it allows you to utilize it defensively rather than just to kill. The activation could then be a for -X/-X until end of turn.