Whenever a creature becomes the target of a spell or ability, destroy that creature. 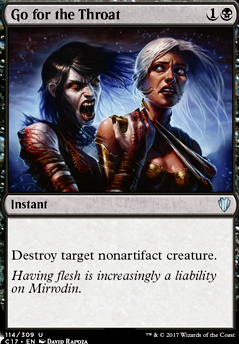 tiffanyann I hear you. Something more like Horobi, Death's Wail could work since you're looking for that particular mechanic. Would these be more on flavor? Rishadan Airship, Umbral Mantle, Hypnotic Siren, Shipwreck Singer, Whir of Invention, Barbed Sextant, Braidwood Sextant or Sea Kings' Blessing

I forgot to leave my list in the OP, oops! Lets see if I can remember the way to link it here, haha Old One Eye

The only real interesting tech might be Tombstone Stairwell, Horobi, Death's Wail, and mebe Quietus Spike.

Necrosis24 I really like the idea of Words of Waste! Pretty sneaky tech, and just the kind of shananigans I was hoping to hear about here! I dont think fat vanilla creatures like Fumiko are really worth the include though. It could be pretty great, but its sorta situational and requires a sizable field to be most effective. I looked at the other suggestions when I was first building my deck but I tried to keep the creature CMC 4 or less wherever possible. I did so to ensure that by the time karaz hits the board we will be guaranteed to have a few unsick attackers to immediately get some effect from them. The lower average costs also will allow us to take greater advantage of the card advantage that Karaz gives us, similar to how Edric works.

Frontier warmonger and Kardur were the only two of those that made the cut. Kardur because he 2 card combos with Conjurer's Closet :D

I do use EDHrec, but Im honestly not a big fan. All you get are the generic goodstuffs cards for the most part. You wont find sweet tech like words of waste or Horobi, Death's Wail on there!

Gleeock Haha, I see you like playing close to the edge! Although Endless Whispers is an old fav of mine, its far too unpredictably dangerous is most decks, haha The fact our opponents get to choose who gets the dead creatures just makes it super hard on us if we are winning and turns all boardwipes into 'only us' wipes. Too many times have I watched a boardwipe go off while whispers was out and be left with no creatures afterwards while my opponents just switched theirs around amongst themselves :P

The oath seems pretty cool though. A little bit of a double edged sword though too. I might have to test it out and see how it plays, thanks :)

Ive def got Curse of Op and Shiny Imp in the deck!

seshiro_of_the_orochi Bloodthirsty blade and disrupt decorum are definitely auto includes. I generally try and shy away from the more minor, single use effects in commander, but with the card advantage that Karaz offers it may be more feasible to run things like Trumpet blast, youre right. Zagras is pretty all-round good, as is hellish rebuke.

Necrosis24 on Are there any Commanders you'd â¦

seshiro_of_the_orochi I was thinking Toshiro Umezawa and Horobi, Death's Wail were made for each other tho I dont think it is a deck people would have fun playing against.

On a similar note Vaevictis Asmadi, the Dire and Tergrid, God of Fright Â Flip would also go quite well together.

wallisface just favor me with a card advantage count. The original build ran 61.

I know the probability difference.

In the case of the 6 drop.. Horobi, Death's Wail would like a word.

I've also cast it a fair number of times.. it's okay when cast..

The grave is my hand.

a little risky, but could be fun, Horobi, Death's Wail

Was always a fan of Horobi, Death's Wail and Toshiro Umezawa

Flooremoji on Looking for cards that have â¦

Horobi, Death's Wail is a bit cheaper for the effect, even if it comes at a downside it's probably better anyway.

Jace, Vryn's Prodigy Â Flip can flip into a walker that can start killing things.