Whenever a creature an opponent controls dies, create a colorless Treasure artifact token with "T, Sacrifice this artifact: Add one mana of any color to your mana pool."

At the beginning of your upkeep, if you control ten or more Treasures, you win the game.

Live Long and Prosper
by Rossamo 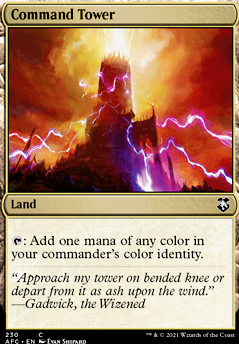 Prosper Throws the Book at You
by Noire_Samhain

Grinning Totem allows you to cast an opponents spell from exile. (one extra Treasure, meh, but its in the theme)

Revel in Riches is a wincon

+1, the deck name is perfection considering Toshi's lore. I recently added a Mirari to my list. Did you leave out Revel in Riches on purpose? It s a great win con, and even if it doesn't work, the amount of mana it generates is absurd. Aetherflux Reservoir is another great win con when combined with Bolas's Citadel . Both of these fit very nicely with K'rrik and Vilis.

DrukenReaps on A Treasure for your thoughts?

Hey y'all! I just put a deck together, Kalain's Treasures, and was looking for some critiques.

I had wanted to include a few artifact matters cards like Goblin Engineer at first but I really didn't end up with enough artifacts in the 99 for that to seem impactful.

There are a few ways for the deck to win. Hellkite Tyrant and Revel in Riches if my opponents are silly. The real method of winning though is likely to come from Reckless Fireweaver or another similar effect.

I think my weakest spot right now is card advantage. Let me know what you think or if you have some interesting ideas. Thanks!

[Primer] Kelsien - One shot, one kill

Kelsien is so cool! Definitely my favorite commander from C20. His backstory really interests me and I wish he had more lore.... As for recommendations, Chandra's Ignition works really well with Kelsien. Pitiless Plunderer as well, if you wanna go in more on the treasure route (which seems to be getting a LOT of synergy with the past two standard sets).

Varchild, Betrayer of Kjeldor and Akroan Horse are more ways to give opponents some creatures to kill.

Hi_diddly_ho_neighbor on Adventures in the Forgotten Realms â¦

Sorry Nassari, Dean of Expression , you were a fun deck, but you will be short lived. Prosper, Tome Bound is exactly what I am looking for for my theft commander. I originally wanted Valki, God of Lies Â Flip to be the commander as I prefer Rakdos to Izzet, but I settled on Nassari since Tibalt has such a large cmc and dies almost immediately. Prosper is great since he interacts well with the "exile stuff off the top of everyone's library and cast it" strategy, is way less threatening, and frees up deck slots that Tibalt has to reserve for extra rituals/ramp. Plus Hellkite Tyrant and Revel in Riches wins don't seem all that difficult with Prosper.