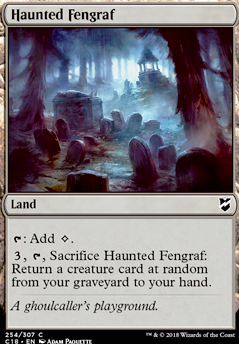 , , Sacrifice Haunted Fengraf: Return a creature card at random from your graveyard to your hand.

Norin the Wary
by Itsyourmove

The Center Does Not Hold
by clonalselection

Emrakul, the Promised End
by TheBestMagicCard

If you want to make a "legal" 5 color eldrazi deck, Esika, God of the Tree Â Flip is a good option, as the creature side color fixes you for those weird colors, and the enchantment side could allow you to cheat out those huge eldrazi creatures. Unfortunately it would mean you would have to redo the mana base to accommodate and probably cut some of the little eldrazi creatures

If you choose to keep your current commander, there are actually a few cards that take advantage of your commander being colorless. Things like War Room and Commander's Plate are super good, as you wouldn't have to pay life and the armor gives protection from EVERY color!

For the colorless mana base, I'd look into replacing a majority of your Wastes with utility lands. There are DOZENS of different utility lands that function like a wastes and come with an added bonus. Off the top of my head, some decent cheap options are things like Haunted Fengraf , Rogue's Passage , Ghost Quarter Cascading Cataracts

If you choose to play your commander as colorless, it would also mean you'd have to cut the cards with colored mana symbols in their mana costs. I'd replace them with ways to generate big amounts of mana. Things like Thran Dynamo , Voltaic Key Manifold Key , Sculpting Steel Worn Powerstone , Sol Ring , Everflowing Chalice , Hedron Archive , Dreamstone Hedron . I would still keep a few wastes around, as you could use cards like Solemn Simulacrum and Burnished Hart to ramp further. And I would definitely look into finding interaction and card draw that is colorless, as those cards are a a premium in that color identity.

Also, I would say that you probably have too many lands. I could see you running like 38-39 lands. It'd mean that you'd consistently hit a land drop every turn in addition to your ramp, making it a lot easier to cast your commander.

Hope those suggestions help, regardless of the direction you choose to go!

I like Scavenger Grounds , I remember playing that in standard! Will probably replace Haunted Fengraf . I've found that this deck is very hungry for untapped green mana turn one and two, so I'm hesitant to cut too much green from the deck!

I also like the other suggestions! Not sure what I would cut at this point, though Thrashing Brontodon or Kraul Harpooner might be on the block, as I'll admit they're pet cards (though pretty decent), as the other's seem like they'd be more consistent.

Anyone got ideas for nonbasic lands I could be using? I tried Tranquil Thicket but it was always frustrating to get a hand with Thallid and your only green land need to come in tapped... Maybe Haunted Fengraf is a good idea?

Just wanna say that I really love the idea and concept of this deck so +1 from me! Have you considered Lightning Greaves / Thousand-Year Elixir since you do run a couple of creatures that has tapping activated abilities? If budget allows, I think that running a Crucible of Worlds package (with fetches) might be neat since you do have a couple of lands that would benefit from recursion. If you do consider it, I would recommend Haunted Fengraf (recursion theme) and Expedition Map for land tutor. I also think that Emeria Shepherd fits really well in your deck but I'm not sure if it fits the curve. Last but not least, since you're running Felidar Sovereign , maybe Approach of the Second Sun is another great alternative win con to complement the lifegain subtheme? Good job!