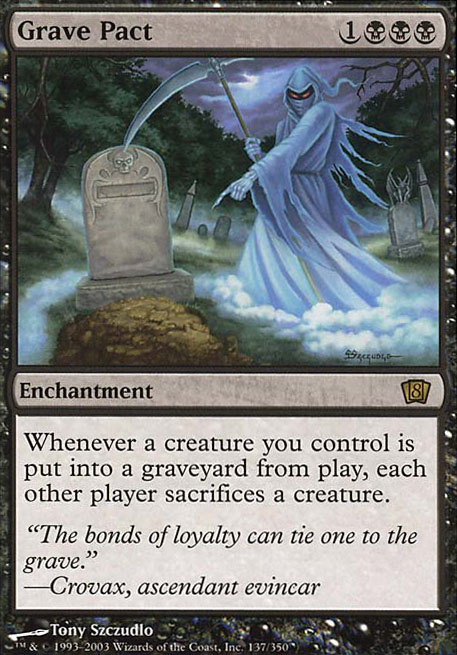 Question if you mutate on Skullbriar, the Walking Grave and then equip Journey to Eternity Â Flip to it what happens with the mutated cards? I know if you flicker them they all come back as separate creatures. does the same happen with mutate ?

For my build Beledros Witherbloom will be amazing (but I do polymorph into 7 cmc things with stuff like Divergent Transformations - not everyone is running a side-polymorph gig like me. Witch's Clinic will actually be a windmill-slap in land for me (& it sounds like you have one) - because, again, lifelink on thantis when she gets bigger per attacking creature is pretty great. IMO Shiny Impetus is ramp that forces aggression which I think is great... If anything I usually get 1 mana any color from it (usually more though) & also force a surprising amount of dmg - I find it to be more thematic in the deck than Cultivate . Clackbridge Troll is a large threat where either people tap him down & I'm happy with 3 life & a card, or someone is taking a good ding, which also makes me happy. Massacre Wurm has done work for me. Journey to Eternity Â Flip usually gets forgotten & recursion on a land has won me games. Calculating Lich

is a pet card that I like. Rampage of the Clans is one of my favorite instant sweepers that converts the board into vanilla attackers (sounds bad) but there are plenty of times where I hit a point that I just want the field to have creatures... Also has won me the game with Purphuros, God of the Forge

Your curve is too high. Cut down on some fours and add some twos and threes. Consider significant ramp improvement. Take out Crystals and use multi color ramp/card draw spells. Consider enchantments over artifacts except for a few. Growth Spiral , Urban Evolution , Journey to Eternity Â Flip, and Manamorphose The mythos wonât play into your commanderâs strategy.

Check out all the charms in magic history, most offer versatility on top of food for hungry Ramos. Boros Charm + Abzan Charm would be bangers here.

I like where you are going with this, but Ramos is a tank. Use it wisely.

Good idea, I might start working on a combo/how to win section.

Thanks, I think with the Razaketh combo, the quickest route to victory using it requires 6 mana, but has Razaketh, Reveillark, and Karmic Guide already in the graveyard, which I think still isn't a fast combo and requires a lot of pieces to be already set up. If you're missing Razaketh in the graveyard but the others are there then it's 7 mana because you need to use Entomb . If Reveillark or Karmic Guide are also missing from the graveyard, the route starts getting more expensive by having to tutor for Entomb with Razaketh or cast either of them from hand.

The route that costs 6 mana is as follows:

If there's a quicker route then let me know, but I think at 6 mana, 14 life, and having a graveyard favourably filled with the pieces, it's quite fair. Adding in Zulaport Cutthroat / Blood Artist adds more lifedrain and mana cost as you'll also need to used Razaketh as the sac outlet to drain, Cutthroat and Blood Artist will make you technically lose only 1 life to Razaketh each sacrifice, but be careful you have enough life to drain everyone, as you might take yourself down aswell.

I'm looking at replacing Journey to Eternity Â Flip with Growing Rites of Itlimoc Â Flip. I was thinking over how you mentioned that Journey wasn't performing very well for you, I think I agree the more I think of it, the flipped side is an overcosted, once a turn reanimation, and the front side allows one creature to be essentially flickered once, and that's all. Growing Rites is still a permanent fetchable with Sun Titan , gives us a weird form of card draw and should be pretty easy to flip into a Cradle with our deck having a high creature count. It'll also allow Torment of Hailfire to hit even harder, as I've seen my playgroup live through a Cabal Coffers Torment.

Your deck has a lot of great synergy and good staples already.

What about Sylvan Library? It's a great card advantage engine. Especially with the higher life totals in commander.

Randomly, I like to put Journey to Eternity Â Flip in a deck in it's colors because once it flips it gives a reanimation engine and can also tap for mana of any color. It's not competitive but very efficient use of a card slot for what you get.