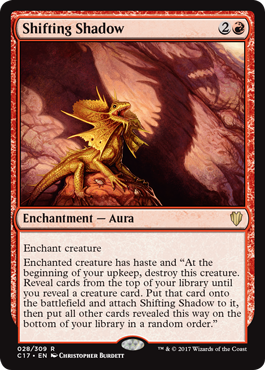 Enchant creature Enchanted creature has haste and "At the beginning of your upkeep, destroy this creature. Reveal cards from the top of your library until you reveal a creature card. Put that card onto the battlefield and attach Shifting Shadow to it, then put all other cards revealed this way on the bottom of your library in a random order.

Shifting Shadow occurrence in decks from the last year

Scouts for the Empyrean Squadron
by 1empyrean 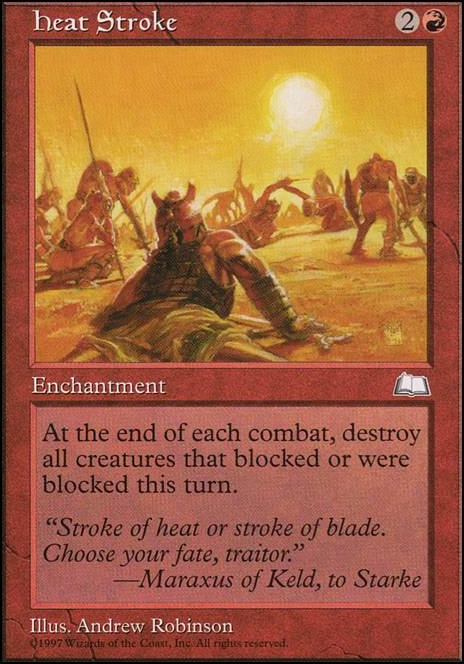 Choke On It
by stinkybot

I think this is one of my new favourite decks, beautiful concept. Could spice things up even more with the likes of Wheel of Misfortune, Shifting Shadow, Sunbird's Invocation, Territorial Hellkite, Dreamshaper Shaman and Possibility Storm just so everyone else can experience your lottery wheel. Even Whims of the Fates makes for an interesting game of commander. Keep brewing awesome decks like this!

Captivating Glance seems like it'd be very good here, as the control effect continues to apply even after the glance moves to something else. Custody Battle works similarly. And Fractured Loyalty, which is particularly strong because you can target the enchanted creature with Ardenn's ability to get the creature, then later move fractured loyalty to something else with Ardenn's ability and repeat the process to gain multiple creatures over time.

Marchesa is amazing! She makes your board state so hard to deal with it's great! This is my version of her:Life After Death, and Death After Life Perhaps slightly more focused on the recursion and ETB effects. But love some straight up aggro! You might consider Shifting Shadow, which can help cheat out more creatures as long as you are able to get counters on them to bring them back with Marchesa. Also Treasonous Ogre can be a good way to manage your life total to keep off the throne for the dethrone ability while adding mana to help get out more creatures for you!

Shifting Shadow works just as good and sticks because Ulamog, the Infinite Gyre is indestructible