Other Goblin creatures you control get +1/+1 and have haste. 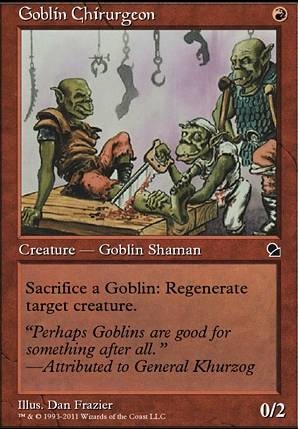 First, I just wanted to say that I really appreciate this Primer. I was turned on to it a while back and it has very much helped my deck. (If you're curious you can find it here: here I just had a couple suggestions.

First, its not out yet, but Pyre of Heroes looks really good for this deck

Second with Conspicuous Snoop there is a doomsday combo involving Kiki-Jiki, Mirror Breaker, Mogg Fanatic and (if you need haste) Torch Courier.

Essentially, play Goblin Recruiter, stack deck so that (from top-bottom) you have Conspicuous Snoop, Torch Courier, Kiki-Jiki, Mirror Breaker, and Mogg Fanatic (Torch Courier is not needed if a haste enabler is out). Draw & cast Snoop. With his ability, cast Torch Courier and give Snoop haste. Use Kiki-Jiki's ability to make infinite copies of Snoop. After that, make a copy of Goblin Recruiter and put Mogg Fanatic on top. Use its ability as Snoop and deal infinite damage to opponents.

With this combo, there is the possibility of a turn two win (though it relies on both a Christmas hand and no interaction, so its definitely a little weak).

As I said, its definitely a long shot, but its there.

Again, thanks for this Primer. Its been super helpful!

Hey dude thanks for the feedback! i really like Icon of Ancestrywill add it, the goblin digging of it is really neat...Kaervek's Torch is cool cause the extra 2 mana for counter! add it!...i dont like Stoke the Flames cause if goblins arent being sacÂ´d theyll be attacking :S I do realize that Krenko is gonna have a bullseye in his head so i did put some haste givers like Fervor, Swiftfoot Boots,Goblin Bushwhacker, Goblin Chieftain, Goblin Warchief and Reckless Bushwhacker....i didnt add Lightning Greaves cause of the tag price, its a bit high and im trying to make this deck as cheap as possible!