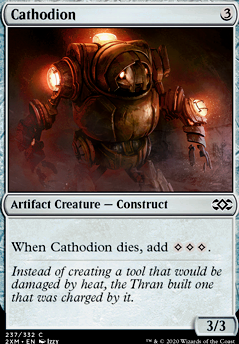 When Cathodion dies (is put into the graveyard from the battlefield), gain . 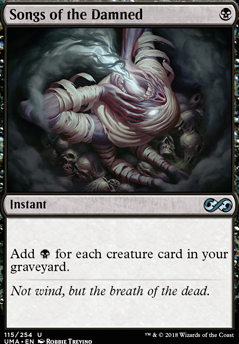 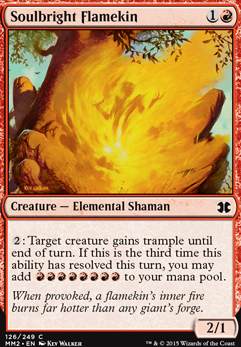 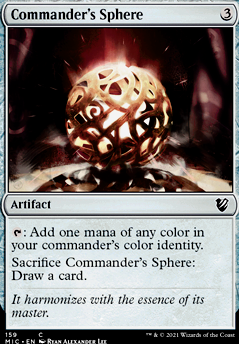 KITTYMANHunkGTI Pretty simple, you want to beat face with Armix, Filigree Thrasher , using his ability to remove blockers during combat, especially pesky ones with indestructible that don't die to things like Ghastly Demise . This is made easier by giving him evasion with cards Golem Artisan .

Treat your stuff like junk, sacrifice Wings of Hubris to get an attack in if they have blockers, or throw Cathodion to Destructive Digger to get more cards in hand for Armix's ability, then return it later with things like Moriok Scavenger .Food, treasure, and clue tokens only make Armix's ability stronger.

Okay so I'm seeing a lot of people listing Teshar, Ancestor's Apostle, without a combo that gives you infinite cast triggers, so lemme clear this up.

Omniscience_is_life on How has no one thought â¦

Gidgetimer on Viscera and stacking triggers.

You will be able to find and draw a mountain btw. You will put Cathodion on top of your library, draw a card, add mana, and then scry 1 (assuming you want to keep the engine going and the mana could go anywhere in the process). Cathodion will already have been drawn by the time you scry, so you will be able to filter cards to the bottom until you find a mountain to put on the top. At this point you order the triggers so that you draw, put cathodion on top, add mana, then scry. The engine will stop at this point, but if all you wanted was the mountain in hand you have accomplished it.

goldlion on Viscera and stacking triggers.

I think I know the answer, but this also wouldn't be the first time I thought so but actually didn't...

Here's an example from my jank cEDH combo deck.

Viscera Seer, Mortuary, Fecundity and Cathodion are out. I could cycle Cathodion infinitely (for etb and death triggers of other things), but I wanted a mountain so I could play Goblin Bombardment.

Viscera's ability's cost is to sac a creature.... so, I cannot scry before the mortuary and fecundity triggers to find the mountain, correct?