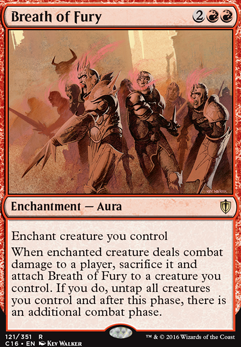 When enchanted creature deals combat damage to a player, sacrifice it and attach Breath of Fury to a creature you control. If you do, untap all creatures you control and after this phase, there is an additional combat phase.

Breath of Fury occurrence in decks from the last year

Back For More
by ClockworkSwordfish 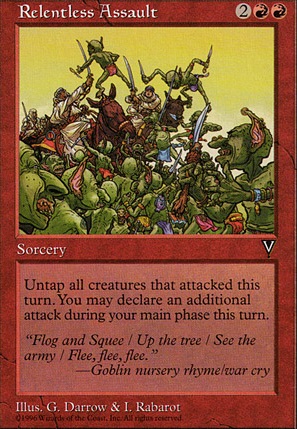 Non-humans with Dash maybe? A couple good Changelings for all creature types and maybe Runed Stalactite .

If you have something that creates a token as you attack on the board Breath of Fury is infinite.

Savage Beating , Scourge of the Throne , Relentless Assault , Breath of Fury , Aggravated Assault , Fury of the Horde , Waves of Aggression ...

Gidgetimer, all of these untap your creatures. Seize the Day is an example of a time where not everything untaps.

Perhaps I am misreading or misunderstanding your post. Merely wanted to give my thoughts on how I am seeing it.

Hope I didn't come off rude. I can be stern and mono-toned very often. Just how I speak / type.

Breath of Fury is a infinite attack combo with trample rhinos

Every once in a while, I discover a card I was unaware of that holds great promise. Often, play testing, mana curve issues and other factors end up proving me wrong.

Somehow, I believe this time the card will hold up to my expectations. I refrained from getting multiple copies, as I will wait to see how it performs here before peppering many decks with it.

I have removed the underwhelming Etchings of the Chosen to make way for Breath of Fury.

Thanks for all the suggestions! I've definitely considered Aggravated Assault for that reason, but part of the reason I'm considering Breath of Fury is that it has more moving parts and thus allows for more interaction from my opponents, hopefully preventing salt. The main issue I see is that breath of fury basically requires Goblin Tunneler or at least Rogue's Passage to be any good, while with Sword of the Paruns I can at least use whatever excess mana I have laying around to activate it if I don't have Skirk Prospector.

Krenko, Mob Boss was my first commander, and I chose him because of his potential to go infinite. Despite this, I only have one infinite combo (Skirk Prospector + Sword of the Paruns) in the deck because my meta isn't a huge fan of going infinite.
Ever since I first learned about Breath of Fury I've been considering adding that as a combo as well. It would certainly make the combo more complicated, as I would need a haste enabler and some evasion on the field as well, but it seems like the payoff would be that it would be more fun if I could actually pull it off. What are your thoughts? deck link