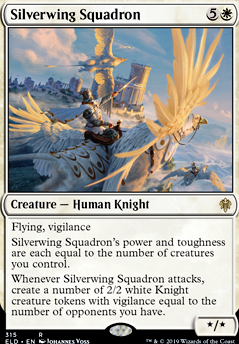 Silverwing Squadron's power and toughness are each equal to the number of creatures you control.

Whenever Silverwing Squadron attacks, create a number of 2/2 white Knight creature tokens with vigilance equal to the number of opponents you have.

Creature count can be deceptive: take a look at the other sections (especially sorceries) and you will see 10+ token makers, mainly Dragon Fodder effects. This is because I want to get 2 creatures out of one card for as little mana as possible. Thus my creature count is in actuality more like 35.

Silverwing Squadron is just okay. You have to wait a turn to start churning out tokens, so it seems slow even in Winota. I didn't pickup Dockside because of the price, but I also don't feel like this deck needs him. Chandra, Acolyte of Flame is a cool card that is still begging for a spot. Might find its way it.

I've really only stuck with this version, but see my comments above featuring other ways to build Winota. There are some interesting angles out there.

As for upgrades... besides fast mana, any upgrades are based on your personal budget and playgroup. This deck is an easy 8-9 power level and something I'd be comfortable bringing to cEDH games for the underdog strategy. It's really in a perfect place for me, and if I had a bigger budget I probably wouldn't change anything.

casual_competitive, I tried slotting Silverwing Squadron during my build process, but I couldn't justify it for the cmc. It is useful but is reliant on my creatures on the field and also on whether I can attack with it or not.

Silverwing Squadron gets a hefty knight with 3 small knights which can work well with tribal cards like Coat of Arms which "coat of arms" in itself can be a wincon. sorry i didn't help more, i skimmed threw my human deck for like a second or two and got those 2 cards for you. i suggest the "coat of arms" card, its pretty nifty.

Would you consider Archangel Avacyn Â Flip? or Silverwing Squadron? The silverwing seems really good because it makes non human knights and the archangel is a non human with flash with a wrath effect on the back side.

I would consider Academy Rector if you have ways to sac it or kill it on demand.