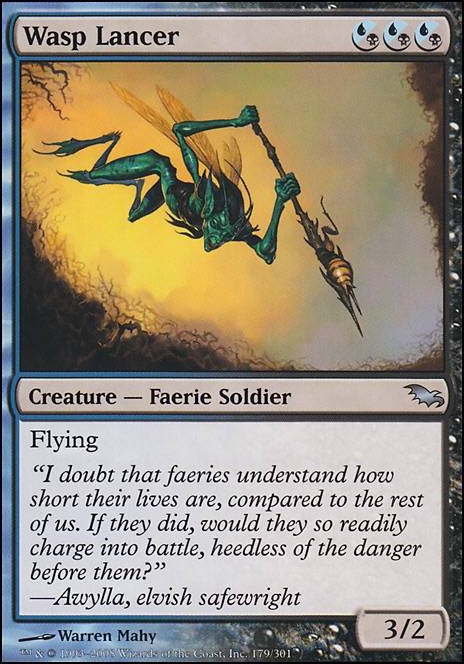 generalrenard on help with my maybe board

So to start off, I would personally go Dimir and run Oona, Queen of the Fae as the commander, because faerie synergy. This would free a few slots for maybeboard cards to slot into. Green does not look all that useful in your deck, as you are not running much green ramp cards like Rampant Growth and

If you want to synergize with some of the faeries in the maybeboard, like Dreamspoiler Witches I would add in more counterspells and control cards like Cyclonic Rift. To take out, I would cut some vanilla creatures like Wasp Lancer and off-tribal cards like Weirding Shaman.

Finnally, you don't really run enough mana dorks or mana rocks to justify running the Dramatic Reversal + Isochron Scepter combo, and don't have a good infinite mana sink other than Oona, Queen of the Fae who isn't even your commander. Unless to dramatically change your deck, I would cut it.

I do agree with the person above. If she isn't quite getting it, maybe ease her in with the 30 card beginner decks. You can get them for free at most local game stores.

As for the deck nothing more simple then Counterspell. Mana Leak and Remand are also good choices. Spelljack for lol's, although that might be a tad complicated. And if you really wanna burn money Mana Drain

I see Glen Elendra Archmage in the maybe board. I feel like that's a must if you can afford it. Phyrexian Arena seems like a must as well.

Sygg, River Cutthroat seems good with all the flyers you have. Coastal Piracy is great card advantage. And if you wanna go all in on mill Phenax, God of Deception

Also one or two good mass creature kill spells. Anything from Damnation and Toxic Deluge on the expensive powerful end, to Extinguish All Hope or Deadly Tempest on the cheaper but less powerful end.

If I were making this deck I would cut, Sea Sprite, Wasp Lancer, Oona's Gatewarden, Wind Dancer, Killing Glare, Mindstatic, and Haunted Cloak

I said a lot but I really enjoy this deck. Fairie beat down! If your girl friend get's into it I think she'll really enjoy it.

I'd love to know what success people have found so far, and/or see some sample lists. You've got Bloodbraid Elf listed as Tier 1, but I'd love to know how this deck can win? Ascended Lawmage sounds fun as I'm still working on Sigarda, Host of Herons hexproof/auras deck simultaneously. Mistmeadow Witch also looks like a control cmdr, but would like to know if it works?