Landfall Â Whenever a land enters the battlefield under your control, target player puts the top three cards of his or her library into his or her graveyard.

Who Needs Green Anyway?
by StaffOfSage 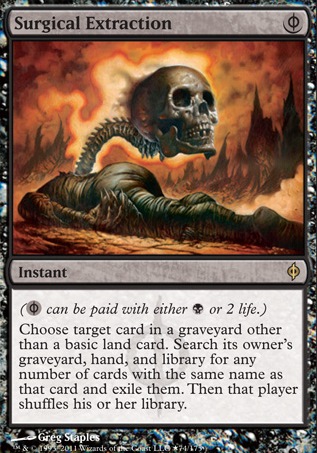 Omnath, Locus of Creation
by Witch_Doctor

They synergize with Brainstorm and Hedron Crab. If your meta has a lot of Blood Moon or Stranglehold, then I would cut the fetches + the crab and replace them with basics :)

I have some more cheaper mill cards if you wanted to cut some of the bigger cards: Glimpse the Unthinkable, Mesmeric Orb, Sphinx's Tutelage, Memory Erosion, Ruin Crab, Bruvac the Grandiloquent (is an all-star, and I pulled one in a Jumpstart pack!), Maddening Cacophony, Archive Trap, Mind Grind and Hedron Crab

There are also some cards to keep graveyard decks off your neck by milling then exiling their yard like: Ravenous Trap, Leyline of the Void, Tormod's Crypt, and Relic of Progenitus

Last but not least, Bitter Ordeal will do some extremely heavy lifting when you mill someone for major cards in a turn. I recently realized that Gravestorm triggers off of any permanent put into any graveyard! That was a big find, and is helpful even with smaller triggers to root through their deck and turn off combo and exile other problematic cards before they are cast.

Mill is finally good in EDH!

Thanks for the question, Afflicti! I mainly run them for their synergy with Hedron Crab and Ruin Crab..

But probably you're right to just cut them in favor of Basics :)

OmegaAura113: I'm using Hedron Crab only to mill myself, as a way to fill my GY for Breach and Vadrok! ;) But thank you for the +1, do you mind clicking the button again? I don't think it went through correctly haha.

Ruin Crab looks like a nice substitute for Hedron Crab - each opponent milling three for the same cost is a huge deal!

I'd suggest Parcelbeast in place of one of your artifacts. Parcelbeast does count as draw, that sometimes also ramps, which fits in very nicely.

Also, mutating it onto Scute Swarm, and having Risen Reef on the field can vomit all the lands in your deck onto the field one at a time, and put the rest of it into your hand, if you get lucky enough on the first few procs of risen reef to get lands. And since it's just looking at the top card of your deck, you don't actually deck out (that turn). While not always practical to do, unless you either have mass haste, Hedron Crab, and/or Ruin Crab, which all give you a win, it's very funny to just go "oops, 3000 scute swarms"

Omnath, Locus of the Roil fits in perfectly with this deck, and works as draw, Deadeye Navigator lets you blink your commander over and over, which lets you draw several cards a turn potentially, and since omnath with count as a new creature coming into the field again, you can get all three of his triggers again.

Valakut Exploration is also a surprisingly good card. It effectively draws you cards for playing lands, and does damage to all your opponents for all the cards you didnt play.

Rites of Flourishing can also just straight up replace Ghirapur Orrery if you're looking for that effect, giving you (and everyone else) more consistent card draw, as well as lands per turn.