If a creature is attacking you and you control a Forest and a Plains, you may play Qasali Ambusher without paying its mana cost and as though it had flash.

The Pride of Two Brothers
by SureSpear

Thatâs A Nice F*ckin Kitty Right There
by UncleBobbyB 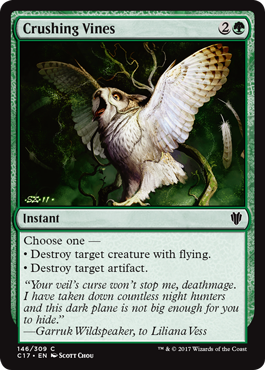 I've seen Qasali Ambusher do some crazy stuff before. The card is better than most would give it credit for, even in a format like modern (especially now, when the format is much more creature-centric and a bit slower).

Anyway, one thing I wanted to point out is that I used to play fair GW aggro/company lists a few years back (when the format was kinda in a similar spot, just without stoneforge and wrenn&sixx..) and I always found this little card - Shield of the Oversoul - to actually be good much of the time. I went from playing 1 just for shits to nearly always having one in those types of decks. I am well aware of the reasons against playing such cards (2-for-1's etc), but I dunno...THAT card always impressed me, esp in GW decks with lords like Wilt-Leaf Liege . I really loved putting it on a Voice of Resurgence or Liege. :)

Dromoka's Command is another card I always tried to fit in as a 1-of, but that's a more replace-able effect I guess (although it's versatility in these decks is great, esp when you consider it's a "counterspell" vs targeted or even aoe burn spells, w/ upside). Burrenton Forge-Tender is also nice to have in the board for those pesky red spells/decks.

Btw, may I ask why you are not using Noble Hierarch instead of the Birds? I find Hierarch to be one of the best creatures in the game, with that exalted ability being more meaningful on her than any other exalted creature. I realize she adds a huge amount to the cost of the deck, though. Cavern of Souls is another obvious one to me, but it poses the same problem as Hierarch...

Cats are awesome. Cats are cat-tastic. (Cat-tacular?) I've helped my brother with making a cat deck, and here are some thoughts:

Disappointed by the lack of Qasali Ambusher

I like this, Hero of Precinct One synergises well with Voice of Resurgence , Eldritch Evolution is just nasty.

But the mana base seems really unstable. I don't know what cards you have access to, but Pillar of the Paruns and Ancient Ziggurat can help casting multicolored stuff more consistently.

I would run Loxodon Smiter over Qasali Ambusher . Could run one more Eldritch Evolution , i guess the one Birds of Paradise is a placeholder for that?

Ohh and a very old but deadly card Mercy Killing !

Darth_Savage on Creatures with conditional casting

Epochrasite is fun with Cascade, there are creatures with alternative costs, this is normally preferable to casting them so sets some conditions. Qasali Ambusher , Akuta, Born of Ash and Greater Gargadon would be examples, there are lots of others...

Odd ass this may sound, you might have too many creatures and the creatures you have may also need minor adjustment. Renegade Rallier , Wall of Omens , Strangleroot Geist or Selfless Spirit seem like they would be ideal as does Eldritch Evolution in a sacrifice deck. I wouldn't play a graveyard strategy here, one, decks are running graveyard hate in the main-board and two, you won't do it as well as a deck dedicated to it.

Siege Rhino and Restoration Angel would be viable with Eldritch, Qasali Ambusher would already be good in your deck, but it's even better if you can cast it for free then flip it over to a Thragtusk or Sigarda, Host of Herons . You also want a basic Plains in your deck, heck you might want to go to 20 land.

I guess what I'd do as a starter is:

As an aside, the single best card to use with Varolz, the Scar-Striped is Death's Shadow ... I hope this is of some help, good luck with your brew.

Your playing an Tribal Aggro deck, so speed is important, that means that Vanquisher's Banner, is far too slow as is Creeping Renaissance. Metallic Mimic is a better choice for providing an extra boost to your cats. As to the cats themselves, no Loam Lion, Wild Nacatl or Steppe Lynx to provide early pressure, seems wrong. Ajani's Pridemate is'n't good in this deck, because Heroes' Reunion has no place in an aggro deck. Any of Fleecemane Lion, Qasali Pridemage, Prowling Serpopard, Brimaz, King of Oreskos or Qasali Ambusher would make more sense.

In short, play more 1 drops and take advantage of the card pool modern offers. Hope this helps, good luck with your deck.